Ahn will start his own party, details next week

Ahn will start his own party, details next week 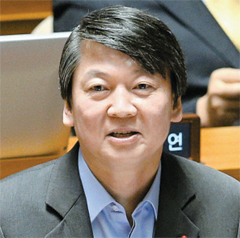 He said yesterday he would reveal details of his plan at a press conference on Nov. 28.

“Representative Ahn Cheol-soo will talk in person about establishing a political force on Nov. 28,” reads a text message his office sent to reporters yesterday. “The exact time and venue for the press conference will be notified later.”

Speculation has waxed and waned over plans for a new party by the medical doctor-turned-software-mogul-turned politician since he went into politics in his brief and unsuccessful independent run for the presidency last year.

In an interview with JTBC in September, he said he may form a new party before the June 2014 local government elections.

“If we are prepared by next June, we could create a party,” he said. “If not, we will seek the best way we can find.”

Given that local elections are scheduled for June 4 and candidate registration begins in early February, Ahn is expected to finalize the establishment of the new party by February.

Ahn’s party will inevitably bring changes to a political scene long dominated by the conservative Saenuri and liberal Democratic parties. The popularity of the DP in particular has been on the decline, and Ahn’s party is likely to compete for support from the same liberal voters.

According to a weekly survey by Realmeter, a market researcher specializing in political and social affairs, conducted from the second week of June through second week of November, an approval rating for Ahn’s not-yet-born party has been 8.8 percent higher on average than that of the DP, 23.7 percent versus 14.9 percent.

The possibility of a partial or total alliance with the DP during the election can’t be ruled out given that division within the liberals would obviously benefit the Saenuri candidates. Migration of lawmakers from different parties is foreseen by analysts.

The 51-year-old former tech entrepreneur has been criticizing the inner circles of both the Democrats and the ruling Saenuri Party, saying they make no effort to “persuade moderate people” and only focus on holding onto power, perpetuating the polarization of Korean politics.

Ahn said in an interview with the JoongAng Ilbo four months ago that Korean politics needs some kind of middle path that bridges the schisms between liberals and conservatives, and the Gyeongsang people versus Jeolla people.