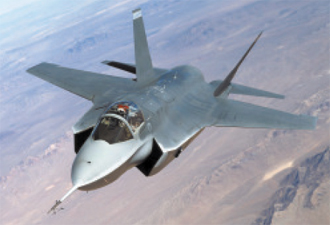 The Joint Chiefs of Staff approved a revised plan for the country’s largest procurement project in history at a meeting yesterday. Chairman of the Joint Chiefs of Staff Choi Yoon-hee and the chiefs of staff of the Army, Navy and Air Force agreed that the military needs a total of 60 aircraft with stealth capabilities in order to accomplish the wartime operational goals and to counter North Korea’s nuclear and missile threats.

But because of budget restrictions, the Air Force decided to make an initial purchase of 40 fighter jets in a contract that will be made next year. The first delivery will start in 2018.

The remaining 20 jets will be purchased down the line, the military said.

Because the Joint Chiefs decided that stealth features and electronic warfare ability are the key requirements of the new jets, the jet to purchase is Lockheed Martin’s F-35A.

“What satisfies the modified requirement operational capabilities is limited to that model,” said Kim Min-seok, spokesman of the Ministry of National Defense.

Under the procurement program, Korea had initially planned to retire 250 aged aircraft by 2020, including F-4s and F-5s, and replace them with 60 next-generation fighter jets by 2021.

The additional 20 new aircraft will be purchased later after reassessing the required operational capabilities based on the changes in the security climate and technological advancements in the future. The military will introduce them starting 2023.

While the military will probably buy more F-35As in the second tranche, it is possible it could choose another aircraft, Kim said.

The Ministry of National Defense said it will come up with the procurement strategy next year and proceed with price negotiations and evaluations to buy the 40 aircraft.

With the changed plan, the military will consult with the Finance Ministry to secure additional budget.

“We need to adjust next year’s budget,” said Oh Tae-shik, a senior official of the Defense Acquisition Program Administration. “The budget assessment has not been completed. We need to consult with the relevant ministries to adjust the total budget size.”

The military said the F-35As will be armed with two air-to-surface missiles and two air-to-air missiles. When the fleet of 40 stealth jets secretly launch, the South will be capable of striking a major target in the North with 80 missiles simultaneously.

According to the military, the 40 F-35As will be deployed from 2018 to 2021. The kind that will be purchased by Korea will be the F-35 Block 3 currently in development. The development of the aircraft will be finished in 2016.

The schedule creates a six-month delay from the initial plan, but the Joint Chiefs of Staff said it will do its best to minimize any possible vacuum in the country’s air defense capabilities.

“We will speed up the purchase of the second tranche of 20 aircraft while maximizing the operational capabilities of the existing weaponry,” Shin said. “We will also consult with U.S. troops to utilize the allied capabilities and do our best to introduce other capabilities, including Korea-developed fighter jets, air refueling tankers and precision guided munitions.”

Yesterday’s decision still requires a final stamp at the procurement committee chaired by the minister of defense early next year, but that is a formality.

By announcing the changed specifications, the drawn-out process to purchase new fighter jets was revived after months of inconclusiveness. After it was first initiated in 2007, Korea initially held a tender, and the F-15 Silent Eagle by Boeing, the Eurofighter Typhoon of the European Aeronautic Defense and Space Company, and the F-35As competed.

After thorny price negotiations, Boeing’s F-15SE advanced to the final stage of the selection, but in September, the government postponed its decision on the winner of the project. At the time, the military said its decision to drop the only remaining contender in the running was due to the aircraft’s unsatisfactory stealth features.

The F-35As are only sold through the Foreign Military Sales (FMS) program, the U.S. Defense Department’s program facilitating sales of American weapons to foreign governments through the Defense Security Cooperation Agency. Because South Korea will purchase the costliest warplane ever in a no-bid contract without directly dealing with Lockheed Martin, concerns grew about its disadvantage in price negotiations.

According to sources in the defense industry, the price for 60 F-35As presented during the earlier bidding process was about 9 trillion won, nearly 1 trillion won higher than the budget.

Military experts also expressed concerns that the decision could cloud Korea’s developing its own fighter jets to replace the F-16s. Because Lockheed Martin offered a weaker technology transfer package in comparison to Boeing or EADS in the earlier bidding process, insiders said the decision could be disadvantageous to the project.