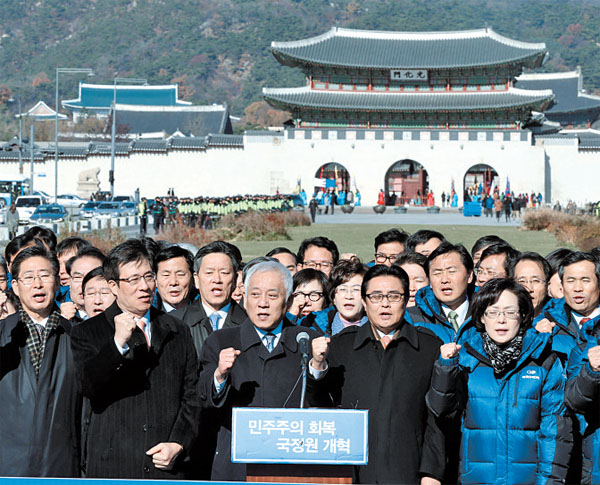 Lawmakers of the main opposition Democratic Party rally yesterday at Gwanghwamun Plaza in central Seoul to urge the government to appoint a special prosecutor to look into the National Intelligence Service’s alleged online smear campaign against their party’s presidential candidate in 2012. By Ahn Seong-sik

A special investigation team of the Seoul Central District Prosecutors’ Office announced its finding yesterday morning and asked a local court to revise its indictment against Won Sei-hoon, former head of the National Intelligence Service, to include additional charges.

The prosecutors said the postings originated from an initial 26,550 tweets and were duplicated en masse through an automated program.

“The 26,550 initial postings are actual texts without counting overlapping messages,” said Lee Jeong-hoe, a senior prosecutor of the Seoul Central District Prosecutors’ Office. “They were duplicated and reposted, raising the total to 1.21 million.”

“The power of propagation is important in an election,” Lee said. “So we believe all 1.21 million postings are illegal.”

The prosecutors are still investigating specific details of the operation, including how many of the initial postings were actually written by NIS agents, how many agents were involved and how many Twitter accounts were used. The prosecutors believe that agents in the NIS’s psychological warfare unit used a Twitter bot program designed to mass-produce tweets.

The investigators analyzed 20 million tweets posted over the past two years by commissioning an IT company specializing in big data analysis. The prosecution also requested the cooperation of the U.S. government to ask for details from Twitter headquarters. The prosecution said it will apply election law violation charges on the postings related to the December presidential election while the National Assembly Act violation charges will be applied to the postings on the legislative and by-elections because the statute of limitation for election law violations has expired for them.

The prosecution already revised its indictment against Won to reflect the charges and submitted it to the Seoul Central District Court on Wednesday. It also provided the court with additional evidence.

The opposition Democratic Party has been boycotting legislative activity to protest the government interference in the presidential election and the President Park Geun-hye government’s refusal to investigate it thoroughly. Yesterday, the DP held a Supreme Council meeting at Seoul Plaza. About 100 DP lawmakers also marched from City Hall to Gwanghwamun.

“When the prosecution indicted Won in June, they said they found only 73 illegal postings,” said Representative Bae Jae-jeung, spokeswoman of the DP. “At the time, the Park government, Saenuri Party and conservative media insisted that the number was so small that they could not have influenced the election. Now I want to hear from them again. Isn’t the nine months of the Park presidency a house of cards built on a foundation of illegality?”

DP Chairman Kim Han-gill urged Park to dismiss Justice Minister Hwang Kyo-an for having tried to play down the probe. He also said Park and the ruling Saenuri Party must accept an independent counsel probe to ensure a fair and transparent investigation.

The ruling party said yesterday that the prosecution’s latest announcement is proof that the investigation is being done thoroughly, dismissing the DPs demand for an independent counsel.

It also said an indictment in a high-profile case is often amended several times, asking the Democrats to stay calm until the trial is over.

The Park government also rejected the DP’s demand for an independent counsel probe.

“The prosecution already made indictments, and they also added more charges,” said Prime Minister Chung Hong-won at the National Assembly’s audit on the government. “The prosecutors are determined to have a thorough investigation, so it is inappropriate to talk about an independent counsel.”