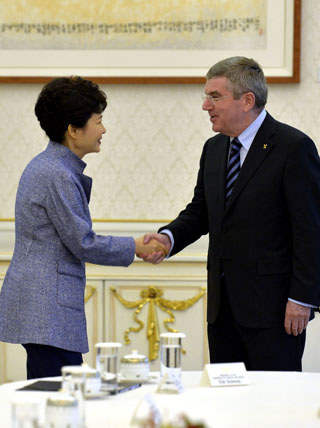 
Thomas Bach, president of the International Olympics Committee (IOC), discussed with President Park Geun-hye yesterday cooperative measures for the preparation of the 2018 Winter Olympics in Pyeongchang.

His visit to Korea comes two months after he was elected as the ninth president of the IOC. His talk with the president primarily covered measures for the successful hosting of the coming Olympics and for the revitalization of cooperative exchanges between Korea and the committee.

“The IOC has nearly 120 years of history, and the expectations from the international and sporting communities are huge because you have become the first Olympic gold medalist to assume the post,” Park told the former fencer-turned-IOC leader.

Bach, one of the most influential figures in sports, earned a gold medal for West Germany in fencing in the 1976 Summer Olympics in Montreal. In the same Olympics, Yang Jung-mo won a gold medal - Korea’s first - in men’s freestyle wrestling, when South Korea first participated in the games.

Bach has visited Korea three times between 1999 and 2011 and said that one of the most touching moments for him was when North and South Korean athletes and officials marched together during the 2000 Summer Olympics in Sydney.

After the meeting with President Park, the leader of the 119-year-old organization visited the organizing committee for the 2018 Games, which is based in Jung District, central Seoul.

After being briefed about the proceedings thus far, he gave a 15-minute speech to employees. Bach acknowledged in a press conference that he was impressed with preparations so far, adding that he was confident the coming Games in Korea will be a success.

As soon as the 2014 Winter Olympics in Sochi, Russia, wrap up, the IOC president said all eyes will be on Pyeongchang and the city will have more opportunities to progress.

When asked about the impact of the 2018 Olympics on inter-Korean relations, Bach said that the role of sports was huge in expanding the depth of mutual understanding and dialogue. He added that he fully understood how meaningful the Games would be for the two Koreas, as his home country of Germany was once divided.

Bach also vowed to toughen anti-doping measures for the 2014 Olympics. “We have decided that for the Games in Sochi, we will increase testing by 57 percent compared to [the 2010 Winter Olympics in Vancouver].”

The 2018 Winter Olympics in Pyeongchang will run from Feb. 9 to Feb. 25. Approximately 6,000 athletes from 80 countries are expected to compete in 15 events.