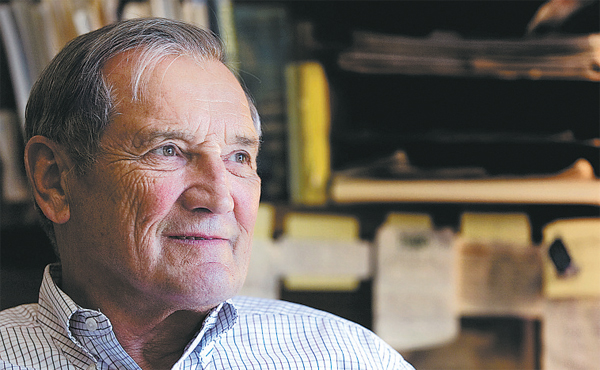 PALO ALTO, California - North Korea has detained an 85-year-old 1950-53 Korean War veteran from California visiting the country as a tourist, pulling him off a plane as he was about to depart last month, his son said on Wednesday.

Merrill Newman, a retiree from Palo Alto, California, was taken away a day after he and his tour guide spoke with North Korean authorities during a meeting in which his military service in Korea was discussed, his son, Jeff Newman, said in an interview with CNN.

His son, who lives in the Los Angeles suburb of Pasadena, said his account of his father’s disappearance and the meeting that preceded it was based on details relayed to him through another American traveling with his father at the time.

“I understand that my dad was a bit bothered but really didn’t go into any detail [about the meeting] with his traveling companion,” the son said in the telephone interview.

The younger Newman went public about his father’s detention hours after Japan’s Kyodo News Service, citing an unnamed diplomatic source in a dispatch from Beijing, reported that an elderly American man who had entered North Korea with a valid visa for sightseeing last month may have been detained. The report did not identify him.

Neighbors of the elder Newman in northern California told Reuters on Wednesday they were concerned about his fate after he traveled to North Korea but failed to return.

The San Jose Mercury News reported earlier that Merrill Newman was taken off a plane as he was about to depart the reclusive country on Oct. 26.

The detention could become another diplomatic bargaining chip for North Korea, which has held Kenneth Bae, a Korean-American tour guide, since November 2012. The Communist state sentenced Bae to 15 years of hard labor.

The U.S. State Department echoed U.S. Embassy officials in Beijing and Seoul who said they were aware of the reports but could not confirm them.

Jeff Newman told CNN, however, that his family has been in contact with the U.S. Department of State and had arranged for heart medication his father needed to be delivered to the North Koreans through Swedish diplomats. Of the meeting his father had with North Korean officials the day before his detention, Newman said, “The Korean War was discussed, and my dad’s role in the service, and the meeting concluded.”

The elder Newman and his traveling companion went to dinner that night, Jeff Newman told CNN, and “the next morning, they got up, checked out of the hotel, went to the airport, got on a plane.

Apparently five minutes before they were ready to depart, an authority came on the plane .?.?. asked to see my dad’s passport, and he was asked to leave the plane.”

A recent newsletter from Channing House, the Palo Alto retirement home where Merrill Newman lives, identified his traveling companion as another resident, Bob Hamrdla, and said that the two were to be accompanied by Korean-speaking guides at all times on their 10-day trip.

“There has to be a terrible misunderstanding. I hope that the North Koreans will see this as a humanitarian matter and allow him to return to his family as soon as possible,” Hamrdla said in a brief statement released by Channing House on Wednesday. The statement provided no further details.

Newman’s son said his father had arranged his trip with a travel agent said to have been approved by the North Korean government for travel by foreigners and that his father “had all the proper visas.”

The elder Newman served as a U.S. infantry officer in the 1950-53 Korean War, later worked as a manufacturing and finance executive and retired in 1984, according to a biography of him in a February 2012 newsletter from Channing House.

Hamrdla, a former assistant to the president of Stanford University who moved into Channing House in 2011, did not return calls. He has led more than 40 study and travel programs to Central Europe, according to a biography on the Stanford website.

A State Department advisory to American travelers warns that “U.S. citizens crossing into North Korea, even accidentally, have been subject to arbitrary arrest and long-term detention.”

According to reports by Kyodo, North Korea claims Newman broke the law.

Separately, North Korea said on Nov. 7 that it had arrested a South Korean spy, but it has not provided any more details.

“The South Korean that North Korea claims to be a South Korean spy turned out to be 50-year-old missionary named Kim Jeong-wook,” the Donga Ilbo said on its website, citing Kim’s family in South Korea and unnamed sources in China.

A U.S. Embassy official in Seoul, who spoke on condition of anonymity, said he believed the two cases were separate. Several U.S. nationals of Korean descent have gotten into trouble in North Korea in recent years. In his visit, Bae brought in what the North said were “propaganda materials” aimed at overthrowing the state.