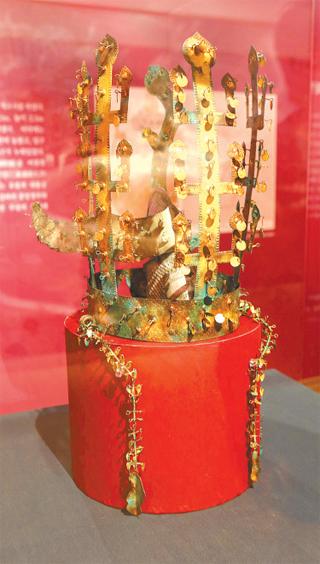 After the shocking revelation that 68 ancient artifacts from the Gaya period on exhibit in the southern city of Yangsan are only temporarily visiting Korea - Japan claims ownership of them and will be taking them back in January - comes another disappointment.

The crown jewel of the collection, a majestic gilded bronze crown that appeared on the front page of this newspaper Thursday, is a fake.

Japan refused to allow the real crown to make the trip from Tokyo National Museum. The Japanese curators said they were very concerned that no harm come to the Korean national treasures they stole during the colonization period. The crown, as the finest piece of the collection, was their biggest concern.

So they refused to let it return to its homeland even temporarily.

Instead, the Yangsan Museum in South Gyeongsang fashioned a duplicate so the exhibit would seem complete when it started its 90-day run on Oct. 15.

“Among the Bubuchong relics at the Tokyo National Museum, the relic we most desired to bring was the gilded bronze crown,” said Shin Yong-cheol, head of the museum. “Seeing its value, shape and how well it’s been preserved, it was the most fabulous cultural asset of the bunch.”

But when the Tokyo National Museum refused to let it travel to Yangsan, the museum agreed in order to bring the other 67 pieces back to where they were excavated nearly a century ago, from the Yangsan Bubuchong Tomb, just 80 kilometers (49.7 miles) from the museum.

Bubuchong means tomb of husband and wife, and historians are still unclear on the exact status of the people buried in that tomb.

The museum admitted yesterday that it made a duplicate of the crown and put it on display.

The 1,500-year-old treasures were given permanently to Japan in the 1965 treaty that normalized relations between Korea and Japan.

The gilded bronze crown stands 33 centimeters tall (33 inches), with a circular band and delicate decorations shaped like antlers, and is remarkably well-preserved. Because of the design, it is fragile.

It is similar in shape to Korean National Treasure No. 87, the 44-centimeter gold crown from Geumgwanchong from the Silla period (57 BC to AD 935).

The Yangsan Museum asked for the loan of the Gaya collection to coincide with its opening last April. But following a controversy over two Buddhist statues of Korean origin stolen by thieves from Japanese temples last year, Tokyo National Museum initially turned it down.

Finally it relented, agreeing to send the whole collection - minus the crown.

Yangsan Museum employed a Seoul company that specializes in creating replicas and began to make duplicates of all the Gaya artifacts, including the crown, based on photos and academic pictures - down to the damages wrought by time.

In the corner of the card describing the crown, they included a small “R” to indicate it was a replica.

“If we borrowed the real crown, we would have been able to study it carefully and compare it to other crowns found in Gyeongju and other areas and discover the owner of the crown or their position,” said Shin. “So this is really regretful.”

All of the treasures will be returned to Tokyo in mid-January.

In the 1965 treaty, Seoul requested 4,479 artifacts taken by Japan be returned. So far 1,432 have been. But the Bubuchong artifacts were not on that list. The Korean government realized in 2004 that some artifacts were given permanently to Japan after documents from the 1965 Korea-Japan agreement were made public.