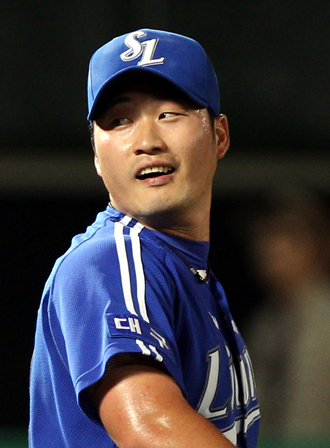 The Samsung Lions, for whom Oh played for nine seasons, said on Friday that the contract includes a 200 million yen signing bonus and a 50 million yen player’s option. His annual salary will be 300 million yen for the next two years. The Tigers will pay 50 million yen to the Lions as a transfer fee.

“I truly thank the Lions for supporting me in this signing,” Oh said. “I learned many things from this team and I had many good memories with the Lions. I don’t know when I will return to the KBO, but I promise that I will throw my career’s last pitch in Daegu [home of the Lions]. The reason I decided to sign with the Tigers was because they have been consistently showing their interests in signing with me with good offers.”

Kim Dong-wook, head of Sports Intelligence, Oh’s agency, said the contract was completed quickly. “I didn’t expect that the contract would be done this fast,” he said. “I truly thank the Lions, who had decided to let Oh go to the Tigers with such a low transfer fee. The price they have accepted represents that they didn’t intend to earn big money for sending their best closer to a foreign league.”

Kim said that the officials of the Lions and Tigers met at Gyeongsan Ballpark in Daegu at 2 p.m. on Friday, and the contract was sealed in three hours.

“We only wanted one thing from the Tigers,” Song Sam-bong, general manager of the Lions, said. “We wanted them to give Oh the best offer as he was the best closer of the league.”

The 50 million yen transfer fee is one of the smallest that a KBO team has received for sending a player to a NPB team.

“We didn’t want the transfer fee to be a barrier for Oh,” Song said.

Earlier last week, Japan’s Sports Nippon reported that the Tigers would offer 200 million yen to the Lions for the transfer fee. It is a typical strategy for a team to leak such information through the media to minimize their expense, but the Lions put the Tigers’ attempt to shame.

“When Oh said he wanted to go to a foreign league, we persuaded him to stay for one more year for one more championship, and he stayed with us,” Song said. “It was our turn to keep our promise to support his challenge. We never considered this as a business [transaction].”

The biggest transfer fee that a NPB team paid to a KBO team was 450 million yen, when Haitai Tigers’ shortstop Lee Jong-bum moved to the Chunichi Dragons in 1998.

Oh will wear No. 22, the number previously used by Fujikawa Kyuji, the former Tigers’ closer who now plays for the Chicago Cubs.