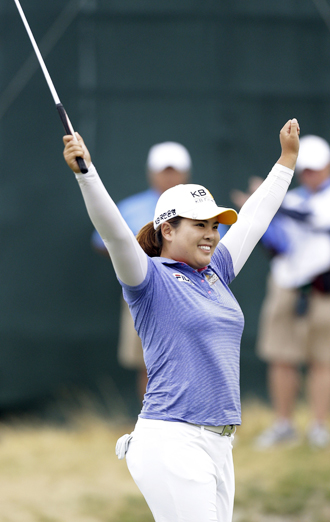 Park In-bee of Korea celebrates after the final round of the U.S. Women’s Open golf tournament at the Sebonack Golf Club in June in Southampton, New York. [AP/NEWSIS]

Park In-bee, the world’s No. 1 female golfer, was honored for winning the LPGA Tour’s Rolex Player of the Year award and highlighted the star-studded evening with a 10-minute emotional speech that brought the crowd to tears.

Last week, the 25-year-old golfer became the first Korean to clinch the award after finishing fourth in the Lorena Ochoa Invitational in Guadalajara, Mexico. Park also delivered a “prepared speech” that expressed how she feels about finding herself alongside an elite list of former winners, including Annika Sorenstam and Lorena Ochoa. The ceremony was held Saturday at the Ritz Carlton Golf Resort in Naples, Florida.

With the trophy in her hands, Park thanked her family and her caddie, Brad Beecher, for helping her through the season. Park has won nine LPGA Tour titles in her career, with six of them - including three majors - coming this year.

Park, whose nickname is the “silent assassin,” which she earned for her calm poker face, said, “Many people around me ask who is the silent assassin and I think it is someone who believes in finding happiness like I do. In the beginning of the season, my goal was quite simple - being happier than last year. Unexpectedly, as soon as happiness became my goal, I achieved more than ever, and I had my best season yet.

“I’m known as a quiet person in the LPGA,” Park continued. “But it doesn’t mean that I’m emotionless. It has been a tough year for me just like for the other players. What I have gone through this year is more challenging than anything I’ve gone through in my life. The season seemed endless.”

She added that she felt huge pressure when she drew so much attention and she said she wasn’t fully prepared to face such things. She said she later understood this as being a part of her job.

She also thanked her competitors, such as Suzann Pettersen of Norway and Stacy Lewis of the United States. “I was able to make some great progress because of them,” she said. “I learned many things by watching them playing golf.”

By winning the U.S. Open in June, Park became the first golfer since 1946 to win three straight major titles.

She had been going for a calendar Grand Slam by winning four major tournaments in one year, but failed in August at the Ricoh Women’s British Open, where she finished tied for 42nd. Since then, Park struggled while the Norwegian came on strong. Pettersen won the 2013 Sunrise LPGA Taiwan Championship in late October, propelling her up the standings to right behind Park.

Park said that she had prepared for the speech for five days after the Lorena Ochoa event. “I wanted to share my feelings with people who helped me and people who shared some memorable moments with me,” she said. “And because there has been some criticism that Korean players are not capable of delivering a good speech in English, I prepared harder.”

She also thanked her fiance, Nam Ki-hyup, 32, who is also a professional golfer, in Korean during the speech, saying, “Saranghae oppa” meaning I love you. “He doesn’t understand English well, but I still want to thank him for his great support.”

Regarding her fiance, Park said that she has been feeling sorry for Nam because the media is interested in him because of her, and she also talked about their wedding plans. She said she is considering getting married in a golf club in Korea next autumn in a “half-Korean, half-Western style.”

“I, the silent assassin, am proud that I have my eyes upon the ultimate goal of my life, rather than winning games. It is happiness. I think I found it. Thank you,” she said. The crowd gave her a standing ovation.