Why we must aid children overseas

Why we must aid children overseas 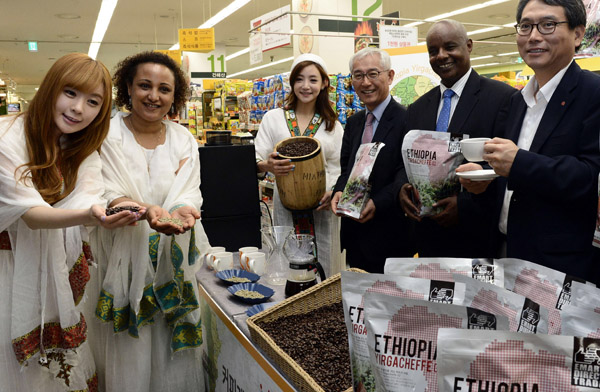 Oh Jong-nam, secretary-general of the Korean Committee for Unicef, third from right, and Dibaba Abdetta, second from right, the Ethiopian ambassador to Korea, attend a promotional event for Yirgacheffe, a gourmet whole bean coffee produced in Ethiopia. One percent of the sales go to Unicef’s children aid program. [NEWSIS]

On Jeju Island, the annual Olle walking festival under the slogan of “Share Hearts on the Trail” was held this year for four days from Oct. 31. I attended the opening ceremony because the Korean Committee for Unicef joined this year as a sponsor of the annual event.

At the opening ceremony, the guests were asked what they wanted to share on this trail. Jeju Gov. Woo Keun-min wanted to share happiness, and Suh Myung-sook, director of Jeju Olle Corp., cited sadness. I answered shoes. My answer raised eyebrows from the audience. I explained that people from our generation in childhood walked in rubber slippers or barefoot.

“Today, we are on this trail in colorful outwear and walking shoes, thanks to economic progress. But there are many children who still live barefooted because they cannot afford shoes in this world. I hope to put shoes on their feet. I would like to propose we walk for a moment on our bare feet thinking of the poor children around the world,” I said.

I received kind words from many people while walking barefoot on the path for an hour and a half. Some said they wished to donate to Unicef after watching me walk to campaign for children in poor countries. The United Nations Children’s Fund signed a treaty with South Korea, which was just in its second year after national foundation. Three months later, the Korean War erupted in 1950. Unicef’s relief works in Korea inevitably surged. Until it closed down its representative office in Seoul in late 1993, the UN program spent $23 million to help Korean children.

In 1994, the non-governmental independent group Korean Committee for Unicef was launched to return the favor to global children. In the first year, it created a fund worth $3.51 million to help children in underdeveloped countries. The fund exceeded the $10 million mark in 2005 and $20 million in 2009, making South Korea among the largest donating countries among 36 Unicef national committees. Korea moved up to the rank of seventh in 2011 and last year was fourth, with donations totaling $75.08 million. In January, South Korea will mark the 20th year since it has turned into a donator.

While serving as the head of the Korean Committee, I often received questions as to why Korea works so hard to raise funds for children overseas when there are still many underprivileged children at home. I pondered this as I walked along the Olle trail. I thought that at least there aren’t any children in Korea that still walk barefoot. Our government and society are also wealthy enough to support and care for our children, but there are still many countries in the world that cannot afford to do so for various reasons.

On the Olle trail on my bare feet, I thought about the meaning of the Korean Committee serving children of the world instead of children at home. I believe that our endeavors will help upgrade the world view of Korea, its people and brands. We hear the devastating news about young survivors of Typhoon Haiyan that tore through the Philippines. Children who have lost homes and families are lacking good hygiene, nutrients and face health dangers. We must do the utmost to protect their lives and well-being. Nov. 20 was the day the United Nations adopted the Convention on the Rights of the Child. We should all think about our part to help needy children around the world.

*The author is the secretary-general of the Korean Committee for Unicef.