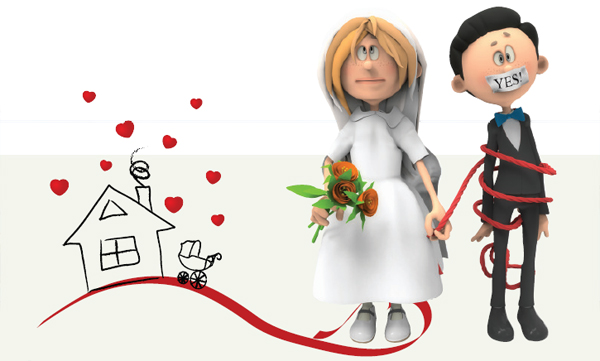 “Do you have any jeonse apartments available?”

I think I’ve asked that question at least 20 times to realtors in my neighborhood this month alone. But with my marriage looming in less than four months, I’m beginning to panic.

Unfortunately, the overwhelming answer is: “You know, dear, there are no jeonse apartments these days.”

Jeonse refers to Korea’s deposit-based housing system. Rather than a monthly rent, you put down a massive deposit, about half the cost of buying an apartment outright. When you move out, you get that deposit back, and in the meantime the owner invests the money. Once common, jeonse apartments are quickly growing rarer and more expensive. But for young couples, like my fiance and me, they’re considered the most economical option for starting out.

At a real estate agency in Yangjae-dong, Seocho District, in the upscale south end of Seoul, I finally heard some good news.

“Yes, we have just one. Do you want to see it now, or forget about it?” asked the 50-something woman who ran the agency. Before I had a chance to ask how much it costs, she walked out and locked the door behind her. “If you don’t take it now, it will be gone tomorrow,” she yelled while she walked. I just followed.

A few minutes later, I nervously walked into an 89-square-meter (958-square-foot) apartment on the 15th floor of a 21-year-old building. It had three bedrooms and one bathroom and had been renovated a few years ago.

“You are the fourth visitor today, but it’s been only one day since the landlord listed it,” said the middle-aged woman who had been living there for four years.

She told me she began her married life here and the house was a good choice for newlywed couples without kids.

“We are moving out because my husband is a government official and has to go to Sejong City next month,” she said. “And another reason is that the landlord asked us to pay 30 million won more in jeonse if we wanted to stay because jeonse prices are going up.”

That was exactly what I have been reading in endless newspaper stories over the past few months.

After looking around the apartment for five minutes, the realtor told me the unit would require a 350 million won ($329,700), two-year jeonse deposit - pricey, but better than many other parts of town that are more central or have better schools.

Many newlywed couples choose small apartments in Yangjae for the first two or four years, and then move to better neighborhoods with good schools when they have kids. Yangjae is especially convenient for couples with two breadwinners because it is well connected to the rest of Seoul and suburban areas thanks to its transportation network.

“There are other customers who want to see this house, so please make up your mind as soon as possible,” the realtor said and went back to her agency.

That’s a lot of pressure for such a big financial commitment - especially since I’m not the one who makes the final decision; my mother-in-law will pay the majority of the cost.

I asked several more realtors nearby, but there were none available.

The next day, when I called the realtor for more information, she told me the jeonse price had climbed another 20 million won due to its popularity. I was shocked and hung up.

I had dreamed of living in that part of town, but those prices were simply out of my league. My hopes dashed, I began looking elsewhere.

A few days later, I crossed the Han River to look for apartments in some northern neighborhoods. But in Oksu-dong in Seongdong District, an area between the river and Mount Namsan that is also popular for new couples, an 82-square-meter apartment was even more expensive, 410 million won in jeonse. Not only was it expensive, but being on the side of the mountain, it was full of steep slopes that would require plenty of sweating to get around. Plus, there were no E-Marts or Homeplus stores nearby and not a convenience store in sight.

“Any jeonse apartment gets taken in less than one week, so don’t think too much before choosing,” said a realtor there. “Jeonse prices are likely to go up further.”

Even if we can find a place, like many young couples, we need help from our parents to be able to afford an apartment. Since I have been working for only three years, I haven’t saved enough yet and have less than 30 million won in the bank. The same goes for my fiance. 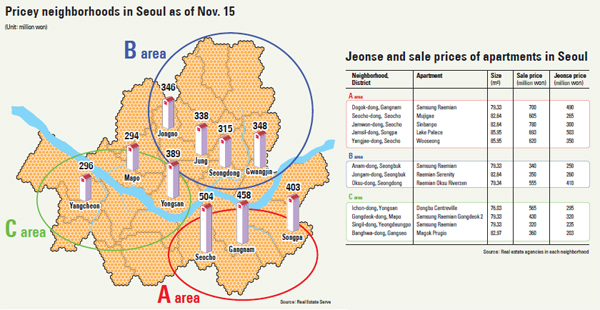 Usually the burden of helping the newlyweds falls on the groom’s parents. Various sources say that the groom’s parents typically provide about 200 million won to help get a place. In the past, the bride’s parents would contribute about 10 percent of the housing price, mostly as a courtesy, but as prices have climbed, so has their support. In my case, my parents decided to offer about 50 million won.

Southern parts of Seoul tend to be the most expensive, along with areas full of good schools and hagwon, or private cram institutes. The most expensive part of town, according to a survey by a real estate website, is Seocho District, where I most wanted to live. There, the average jeonse is 504 million won. It is followed by Gangnam District, also in the south of the city, at 458 million won, Songpa, further to the southeast, at 403 million won and Yongsan, in the center of Seoul, at 389 million won.

It’s a far cry from the 1990s, when jeonse apartments starting around 100 million won were plentiful. It used to be that for young couples, finding the money for a jeonse deposit for a decent apartment in a good part of town was their biggest worry. But today, even finding a jeonse place is incredibly difficult.

For my parents’ generation, housing was considered a solid investment. You could buy something for 200 million won, wait for the area to be redeveloped, and find the price shot up to 600 million won after the redevelopment was done. Not anymore, though.

Housing prices kept climbing after 2000, shooting up 40 percent just from 2004 to 2008. But since 2008, the property market has been stagnant, and with interest rates so low, jeonse is no longer considered a good deal for property owners, who began turning to monthly rent like in most countries.

According to the Ministry of Land, Infrastructure and Transport, 39.8 percent of housing contracts in the first half of this year were monthly rent, way up from 33.9 percent last year. During the same period, the proportion of jeonse contracts fell from 65.9 percent to 61.1 percent.

However, demand for jeonse housing is still high, despite the shrinking supply, so prices continue to rise.

In fact, the price of jeonse contracts has risen for 65 consecutive weeks nationwide. In Seoul, according to the Korea Appraisal Board, jeonse prices have risen for 31 straight weeks.

Jeonse may be an unusual system, but it has deep roots going back to the Joseon Dynasty (1392-1910). It really boomed after the Korean War finished in 1953, when Korea was growing rapidly and had high interest rates for so many years. Jeonse was a good deal for landlords and it spared renters the burden of monthly payments, allowing them to save.

“Until recently, the needs of housing suppliers and demand were quite compatible,” said Cho Man, a real estate asset professor at the Korea Development Institute. “Under the jeonse system, suppliers could reinvest the lump-sum deposits in other assets and earn additional profits, while tenants could receive their money back when they moved out.”

While many foreigners are skeptical about the jeonse system at first, some find it intriguing because they can get their money back.

“There are some foreigners who live here for a long time who switch from monthly contacts to jeonse because they know that it is more economical,” said a realtor in Itaewon-dong, the neighborhood with the largest foreign population in Seoul.

But others think the system no longer makes economic sense, as the huge amounts of jeonse deposits often require huge bank loans.

“If you take out a 100 million won loan at 5 to 6 percent interest, you will have to pay more than 1 million won every month [in interest and principal] to repay the loan in the next 10 years,” said a banker from Singapore who is living in Seoul. “I think the monthly rent system makes more sense, considering the country’s high household debt problem.”

The Bank of Korea said last week that the nation’s household debts totaled 991.7 trillion won and would soon top 1,000 trillion won, fueling concern about debt dragging down the economic recovery next year.

The Park Geun-hye government is providing cheaper loans, with 1 to 2 percent interest rates from the state-run housing fund, but only couples who earn less than 55 million won annually qualify. Commercial banks offer a variety of loans with slightly looser restrictions, but their interest rates range from 3 to 5 percent.

“It is hard to find a regular worker who earns less than 30 million won annually these days, so we don’t pay much attention to what the government says; it’s too unrealistic,” said Kim Soo-kyeong, a 29-year-old accountant at a conglomerate who will get married next month. “Another problem I find among individuals part of the young generation like myself is that as we are getting accustomed to living with debt. Too many people consider their loans as a free lunch, while splurging on shopping, leisure and entertainment.”

As for me, my wedding is getting closer and I still have not found a place to live. I’m not sure what I can do, so I’ll keep looking.