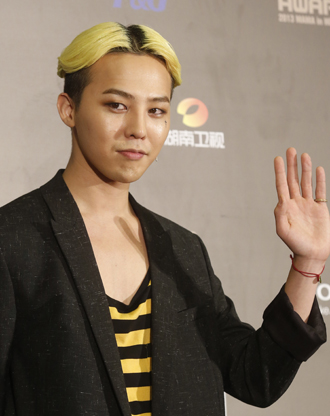 The spotlight was on G-Dragon at the 2013 Mnet Asian Music Awards, which was held on Friday at the AsiaWorld-Expo in Hong Kong, as he came away with four awards including artist of the year, best male artist, best music Video and best male solo dance performance.

“Thank you. I’ve prepared all these works with all my heart,” said G-Dragon while receiving the artist of the year award. “I’ll try to make performances that leave lasting impressions on audiences’ hearts.”

Veteran singer Cho Yong-pil, who scored a surprise hit with “Bounce,” his first in a decade, received the song of the year award, while boy group EXO won album of the year.

Launched in 1999 as the Mnet Music Festival, the show was rebranded five years ago as MAMA. Organizer CJ E&M says it is the biggest music award show in Asia.

Several big international names were on hand, including Stevie Wonder, who won the Music Makes One Ambassador award. Wonder also sang several of his most famous hits, including “I Just Called to Say I Love You” with Sistar’s Hyorin and Hong Kong singer Aaron Kwok.

“The most important songs that have moved the world forward have been songs about love and about unity,” said Wonder as he received his award. “If we all can come together, we can make a world of difference.”

Norway’s comic team Ylvis performed “What Does the Fox Say?” that turned into a collaboration with Korea’s goofy girl-group Crayon Pop and their novelty song “Bar Bar Bar.”

Hallyu icon Rain, who was released from the military in July, performed a medley of his hits.

The event was broadcast live in 15 countries and also aired through YouTube, Yahoo Japan and Youku Tudou of China.