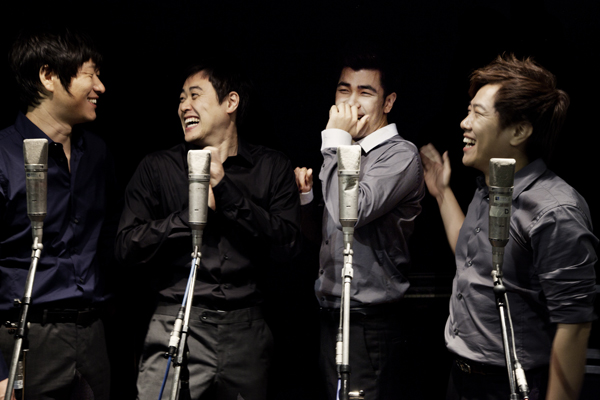 Individually, the four opera singers are of great repute in European and American opera halls, each having won numerous international competitions. But in Korea, they get together under a less familiar name: Rottini.

Tenor Park Ji-min, 35, is the leader of Rottini. He formed the group two years ago, calling up three baritones he knew, Lim Chang-han, 34, Aldo Heo, 34, and Joseph Lim, 30. Together, they form one impressive vocal ensemble that holds an annual classical concert in Korea. 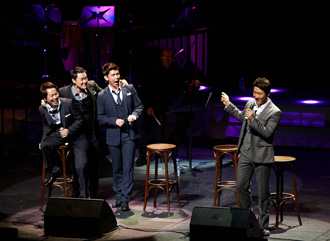 Rottini, a classic vocal ensemble, is seen here making their debut at the Seoul Arts Center last year. Their next concert is on Thursday at the same venue. Provided by Credia

“When we are performing as Rottini, we don’t seek artistic or classical values, but try to make our concerts interesting for Korean audiences, who sometimes consider classical concerts boring or difficult,” said Park.

Indeed, when they were invited to perform with soprano Sumi Jo in September, they sang classical tunes that are well known to Korean ears.

They even appeared on stage once wearing nerdy helmets made famous by the K-pop group Crayon Pop and imitated the group’s popular dance moves from the song “Bar Bar Bar.”

For Rottini, the “Rotti” comes from Pavarotti, as in the famous tenor Luciano Pavarotti, while the “ni” comes the Italian composer Gioacchino Rossini.

The quartet’s second annual concert will be held Thursday at the Seoul Arts Center.

Leading up to the show, the four singers sat down with the Korea JoongAng Daily to talk about their thoughts on music and the Korean audience, promising “you don’t have to turn up wearing a tux and a bow tie.”

Q. What made you to form Rottini?

Park: I bet we were the first opera singers who danced on stage wearing helmets during an actual classical music concert. Of course, we didn’t do it to be the first ones, but for fun. It’s our duty to satisfy the audience and, in Korea, we believe that allows them to really enjoy the concert. We don’t want to act like, ‘We are classical musicians, we are opera singers so we have to be all serious and strict.’

Joseph Lim: We are opera singers, but when we are Rottini, we also try to be entertainers for the Korean audience.

But Rottini is still a group of classical vocalists, right? Sometimes, Rottini is referred to as ‘popera’ singers.

Joseph Lim: What we do is a new genre. The format itself is new. We as individuals are already famous opera singers, but we just get together once a year to have fun and express our characteristics that have been suppressed on opera stages. It’s like living a double life.

Although we try to make the Korean audience enjoy the show, our main focus is our voices and our songs. If we can’t move the audience with our voices, the concert would be meaningless and there would be no need for us to come all the way to Korea.

Park: We are like cooking utensils. The dish that these utensils produce may change according to different appetites, but the utensils don’t change. We are still showing the audience classical music, but just not in a difficult or boring way.

What made you want to perform together?

Joseph Lim: It’s like living a double life. In fact, when we do this, we have many concerns. Some people may think we are just here to entertain people or to earn money, but that’s not the truth. We just do it because when we are doing this, we as singers are also having fun. By doing this, we may popularize classical music, but for me personally, I am not that ‘fighter’ type. I just do this because it’s fun.

What do you find most interesting about Rottini?

Heo: It’s so different to opera performances. As Rottini, I can do what I’ve never tried before at opera halls. And seeing the Korean audience enjoying what we do, I can’t forget the feeling of ecstasy.

Rottini recently released its first album, ‘Vita Mia,’ composed of romantic Italian songs. But Lim Chang-han was unable to participate because he was performing in Europe.

Park: The album turned out great, but it’s not 100 percent Rottini. I’m not saying that the album lacks in a certain way. We just couldn’t show the true Rottini because Chang-han’s voice is not included in this album. To listen to what real Rottini sounds like, you should come to the concert.