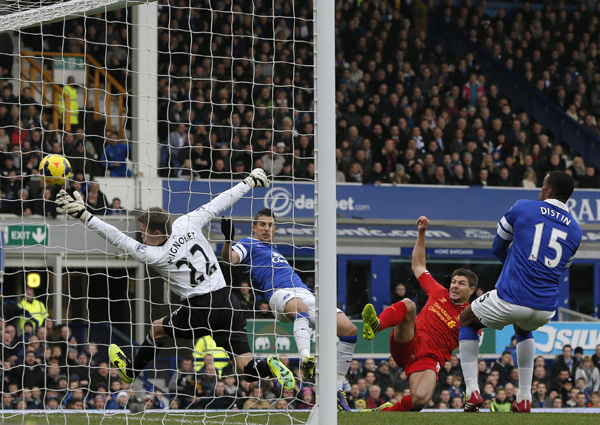 Everton and Liverpool served up a lunchtime classic at Goodison Park on Saturday as Daniel Sturridge got a late equalizer for the visitors in a 3-3 Premier League draw after the hosts twice came from behind to lead.

Everton thought they had done enough for their second league derby win in 14 attempts when Romelu Lukaku headed in his second goal of the game eight minutes from time after Liverpool keeper Simon Mignolet had kept them at bay with some great saves.

But Sturridge, on as a late substitute as he fights to shake off a thigh injury, had the last word when he connected with a Steven Gerrard free kick in the 89th minute.

Second-placed Liverpool now has 24 points, one behind Arsenal, which hosted third-placed Southampton later on Saturday.

Everton, which came from 2-0 down to draw, 2-2, in the corresponding fixture last season, move to fifth on 21 points, above champions Manchester United, who visit Cardiff City on Sunday. Chelsea, fourth on 21, play in Saturday’s late kickoff at West Ham United.

Saturday’s Goodison clash was one of the most eagerly-awaited derbies for many years, with both teams in good form and Liverpool knowing they could go on top, possibly only for a few hours, with a victory.

It got off to a breathless start when Philippe Coutinho scrambled Liverpool ahead after five minutes, only for Kevin Mirallas to hammer in the equalizer two minutes later.

Liverpool regained the lead after 19 minutes with a long-range free kick by Luis Suarez and the striker, back on club duty after a week of crisscrossing the globe for Uruguay’s World Cup playoff ties, was the center of attention later in the half when caught by Mirallas’s wild, high lunge, for which the Everton midfielder was lucky to escape with only a yellow card.

Everton, which has lost at home in the league only once in the last 20 months, came out fighting again but found Mignolet in top form.

He blocked shots from Gerard Deulofeu, on as a replacement for Leighton Baines just after the break, and Lukaku twice, while Joe Allen missed a sitter for Liverpool on the hour after more great work by Suarez.

Belgium striker Lukaku, rapidly becoming a crowd favorite at Goodison on loan from Chelsea, finally found a way through with a shot from 12 meters after 72 minutes, and sent the home fans wild with a brilliantly-timed header 10 minutes later.

Sturridge, on for the last 10 minutes, then made it 3-3 and both sides could have won in stoppage time before the referee whistled the end to a game that the league’s marketing men will already be packaging for their next sales pitch.

“It was a terrific game. I’ve been involved in a few [derbies] and they are real heart-stoppers,” Liverpool manager Brendan Rodgers said. “We again showed our resilience and ability to fight back. This is a difficult place to come and they haven’t lost at Goodison Park this year.”