At Horim Museum, the past is on the table

At Horim Museum, the past is on the table

An exhibition at the Horim Museum explores the soban, a small portable dining table that every Korean household used to own in the old days. [JoongAng Sunday]

The soban, a small portable dining table used in Korea’s ancient times, is a concept that is difficult to explain to people from the West for several reasons.

For starters, it has to do with the structure of traditional Korean houses, where the kitchen was far from where people ate. Women had to deliver the food they prepared, and the soban was an important vehicle. That is why, even decades ago, the soban could be found in every Korean household.

Second, it has to do with the Korean custom of sitting on the floor to eat, rather than on chairs at a table. 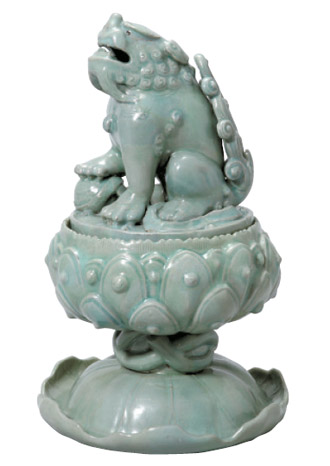 A 12th-century lion-shaped incense burner Provided by the museum

And last, but not least, it has to do with traditional Korean dining culture, where, influenced by the Confucianism that dominated Korea’s Joseon Dynasty (1392-1910), people of different genders, classes and age groups did not eat together. That is why people who see the soban for the first time are surprised by its adorable petite size.

The Sinsa branch of the Horim Museum is holding an exhibition dedicated to the soban. Titled “Soban - Design of the Joseon Dynasty II,” people can enjoy 40 soban of various designs. The “II” is there because it’s a sequel to the exhibition the museum held in 2010, also dedicated to the wooden furniture of the period.

Along with Leeum, Samsung Museum of Art in Hannam-dong, central Seoul, the Horim - 31 years old now - is considered one of the best private art museums in Korea, home to some 15,000 artifacts, including 54 state-designated cultural properties.

“One can say soban is a type of wooden furniture that is both functional and aesthetic,” said Park Jun-yeong, a curator at the museum.

Soban had to be strong enough to hold brassware and chinaware, yet light enough to be carried by women.

“Depending on who made it and where it was made, soban takes different shapes and patterns. Each has its own individuality,” Park said. “We chose pieces that best displayed the textures of the wood. Many of the pieces on display are being shown to the public for the first time.”

Given that the soban could be found in very early relics - as early as the tomb murals of the Goguryeo Kingdom (BC 37-AD 668), perhaps it’s only natural that the soban comes in so many different types.

Besides the soban, the Horim Museum is also displaying incense burners and ceramic pieces in separate exhibitions, “Hyangno - Incense Burner Which Governs the Mind” and “Horim Ceramic Masterpieces.”