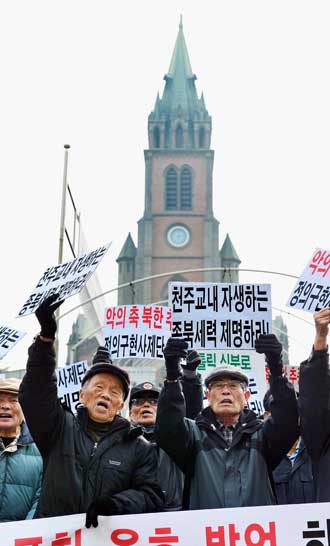 A left-wing Catholic group is facing criticism over defiant remarks made by a senior priest who denounced President Park Geun-hye and made seemingly supportive comments about North Korea’s deadly shelling on a western South Korean island three years ago.

The Catholic Priests’ Association for Justice, a South Korean religious group formed by leftist and liberal Catholic priests, held an “emergency Mass” on Friday evening at a cathedral in Gunsan, North Jeolla, with some 300 people attending.

“You know, the Northern Limit Line was temporarily drawn by the UN Command to prevent our military from invading North Korean territory,” Park said. “The line is not related to North Korea, and it was not mentioned in the armistice treaty. It is not a military demarcation line at all.”

Refusing to recognize the legitimacy of the de facto maritime border, Park said it was not wrong for North Korea to attack the South Korean island.

“What if Japan carries out a military exercise on Dokdo, which is our territory?” he said. “What should our president do in that case? We should shoot them.

“What if the Korea-U.S. joint military drills continue on an island near the controversial NLL?” he said. “What should North Korea do in that case? North Korea also should shoot them, and that was the shelling on Yeonpyeong Island.”

When it came to the NIS’s alleged interference with the December 2012 presidential election, he concluded that the two presidents - Lee and Park - were ultimately at fault.

He also mentioned the sinking of the naval ship Cheonan in March 2010, which is generally agreed to be the result of a North Korean torpedo. But the priest said the result of the investigation was distorted by the Lee administration.

“Can you believe the allegation that a North Korean warship torpedoed our ship while there were three Aegis destroyers participating in the Korea-U.S. drills?” he said. “If that is true, we say, ‘Wow, North Korea has such cutting-edge technology!’

“President Lee Myung-bak set up this scandal blaming North Korea,” he said. “Do you know why? It’s because if he makes North Korea an enemy, he could punish people for being pro-North Korea.”

After his speech, a group of priests of the association issued a joint declaration, demanding the arrest of former President Lee and the resignation of Park.

“If the government does not accept this demand, we will continue our Mass and prayer services and say that [Park] is not the president of the Republic of Korea anymore,” they said in the declaration.

The Blue House expressed displeasure at the defiant speech.

“I doubt which country is their homeland,” Lee Jung-hyun, the senior presidential secretary for public affairs, told reporters on Saturday.

“It is not praying, but cursing,” another Blue House official told the JoongAng Ilbo. “Public opinion will judge him.”

The ruling Saenuri Party said the Catholic group denied the legitimacy of the president.

“We can’t believe that this is a comment by a priest of the Republic of Korea,” Min Hyun-joo, a spokeswoman of the Saenuri Party, said in a statement on Saturday. “It was an inappropriate comment ahead of the third anniversary of the Yeonpyeong shelling.”

Representative Yoon Sang-hyun, a senior member of the Saenuri Party, pointed out that some members of the Catholic group had an alliance with the opposition Democratic Party, participating in the DP’s campaign on the NIS scandal, along with other liberal politicians, including independent lawmaker Ahn Cheol-soo.

“Now we understand why the alliance of the opposition parties, in which these people are participating, is under fire, because they are actually aiming at protesting the outcome of the presidential election,” Yoon said.

The Ministry of National Defense also issued a statement yesterday, calling the comment “irrational” and that it “insulted the bereaved families” of the Cheonan case and the Yeonpyeong shelling.

The DP kept its distance from the religious group, saying the comments were just the personal opinions of the priest.

“We don’t have any reason to respond to it,” Park Yong-jin, a DP spokesman, said on Friday in a statement. “You can’t ask us to take responsibility for a thing done by a religious group. Although several priests from the group joined the alliance, this is a matter of personal opinion.”

Upset by the priest’s comments, a man in his 60s called the police emergency hotline yesterday and said he had set up two 3-kilogram (6-pound) explosives in Myeong-dong Cathedral, central Seoul.

All the people in the cathedral were evacuated for an hour until police found there was no bomb or weapon in the cathedral. The man was soon arrested in Asan, Gyeonggi, yesterday afternoon for the false report.

Formed in 1974 by several young priests protesting the dictatorship of then-President Park Chung Hee, the Catholic Priests’ Association for Justice participated in the democratic movement of the 1970s and 1980s.

More recently, the group has taken part in a series of anti-government demonstrations and rallies, including protests against the government’s decision to send troops to the Iraq War in 2003; a Mass calling for the abolishment of the National Security Law in 2004; a Mass against the government’s plan to relocate a U.S. military base to Pyeongtaek; nationwide rallies against allowing the import of U.S. beef for fear of mad cow disease in 2008; and a rally against a local court ruling that convicted the protesters involved in the deadly Yongsan fire in 2009.