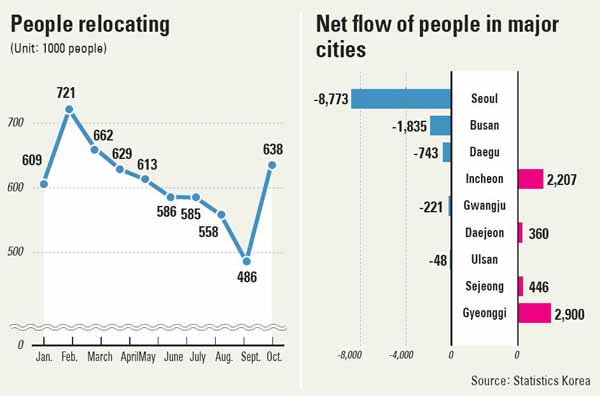 It has become evident that people are moving out of major cities largely because of high real estate prices, particularly jeonse, or long-term leases. Every month, roughly 5,000 to 10,000 have been packing up and leaving Seoul and settling in nearby areas that offer cheaper apartments.

According to Statistics Korea yesterday, a net outflow of 8,700 persons was recorded in Seoul last month.

People moving out of the nation’s capital are relocating to neighboring areas like Gyeonggi and Incheon. Incheon saw a net inflow of more than 2,000 persons last month, while Gyeonggi’s inflow was 2,900 persons.

A recent study by real estate information provider Budongsan Sub showed the average price of a long-term lease, or jeonse, in Seocho, southern Seoul, as of the second week of November was more than 539 million won ($507,317).

This was twice the cost of jeonse in nearby Seongnam, Gyeonggi, which averaged 260 million won. And Incheon was half as much as that at 130 million won.

Despite government efforts to ease rising jeonse prices, the long-term lease apartments have grown in value for 65 straight weeks.

The rising jeonse prices are largely blamed on a lack of supply, as more landlords prefer to lease their apartments on a monthly rent basis rather than in long-term contracts because the loose monetary policy by the central bank has kept interest rates on bank deposits low.

Meanwhile, the overall population that relocated last month totaled 640,000, a decrease of 1 percent compared to the same period last year.