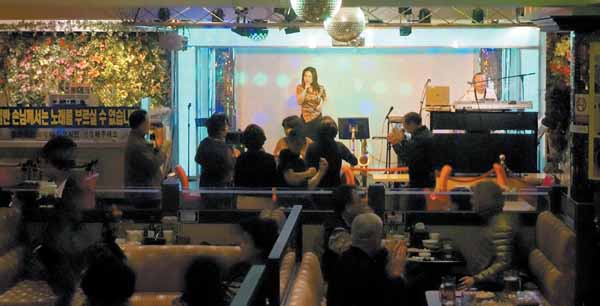 Pagoda Town: A restaurant that offers club-like experiences, such as inviting amateur singers to perform onstage. Food dishes from 6,000 won; beer and makgeolli are 3,000 won

Every day around lunchtime, the Sky 31 Himart Buffet in Jongno District, central Seoul, is packed with about 100 silver-haired senior citizens who take their seats near the window.

“Here, people in their 60s are considered the young generation,” said Seong Jeong-ho, a cook at the restaurant.

The customers are dressed neatly, but some of them, like Kim Jong-han, 84, are trying to be trendier by wearing aviator sunglasses.

“I feel comfortable coming here as people around my age are here,” he said, adding that he comes to the buffet up to three times a month to meet with friends.

Businesses that cater specifically to the “silver generation” are becoming more popular in the Jongno area, contradicting the notion that only lonely and poor elderly people come to that part of town, especially near?Tapgol Park.

The neighborhood is becoming more hip and trendy for those senior citizens who are ready to open their wallets as more restaurants, cafes, clothing stores and even seniors-only movie theaters are opening up. Many industry experts have speculated that the area will expand further in the near future.

Later in the evening of the same day, Pagoda Town, a seniors-only live music cafe that opened in 2010, was crowded with people in their 70s.

“All the men coming here and about half the women want to look for someone they can talk to, and that’s why they come here,” said manager Lee Seung-wu, who arranges impromptu meetings between the seniors. “It is obvious that they are still young inside when I see them couple up, then drink and dance together.” 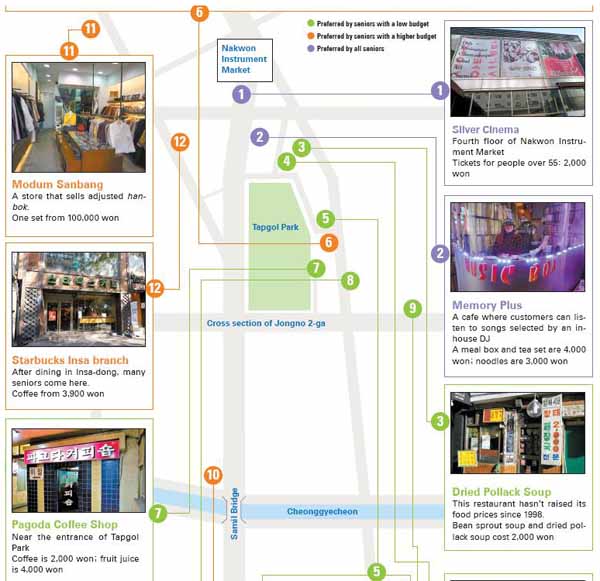 Jongno, which has long been a gathering place for Korea’s elderly population, has been growing recently because of two groups of customers: people who want to spend a minimum amount of money to enjoy themselves and those who don’t mind spending a little more for a better leisure atmosphere.

The former usually goes to?Tapgol Park,?while the latter heads to the Jongno 3-ga and 2-ga area. As the customers have different tastes, stores near the park try to attract business with cheaper prices while the others try to provide more luxurious services.

The major commercial area for inexpensive places is along the wall of the park, where hundreds of restaurants and barber shops can be found.

Kim Sun-in, 66, a cook who has been selling bean sprout soup here for the past 20 years, says she has kept the price low since 1998.

“After the financial crises, we lowered the price from 2,500 won to 2,000 won, and then have never been able to raise the price since,” Kim said, adding that she now makes 300 won or less in net profit as the prices of ingredients and gas have gone up.

“I can’t raise the price because if I do, people will go to a free?soup kitchen?instead of coming here. But thankfully, there are more people coming to town, so we manage to continue the service,” Kim said.

Seoul Buffet, on Jongno 5-ga, is one of the area’s most well-known restaurants. Although it is called a buffet and serves about 10 dishes, including porridge and bulgogi (marinated beef), the price for both lunch and dinner is 3,000 won. 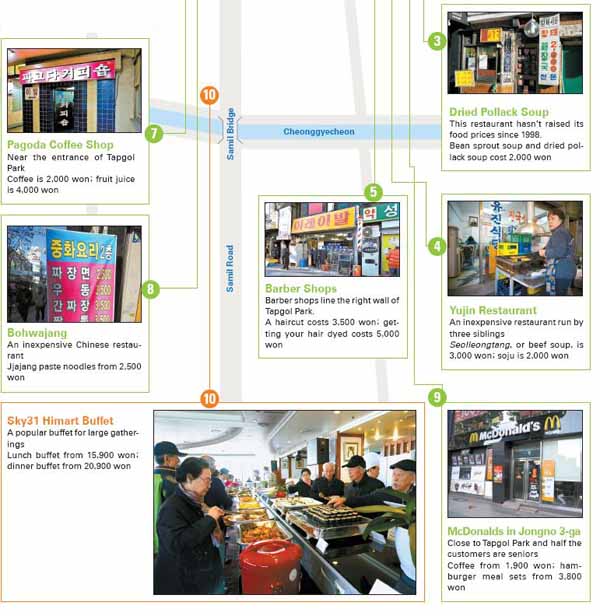 “However, there are so many elderly people who think that the price is too high,” said owner Kim Deok-su, who has been running the business for the past 25 years.

“People who don’t have much money seem to live an even harder life these days, and because they say they can’t afford to pay 3,000 won for a meal, we give out free lunch to at least 10 people every day,” Kim said.

Meanwhile, some venues that cater to seniors place a higher priority on the overall dining experience, rather than the price. For example, Sky 31 Himart Buffet recently raised its lunch buffet price to 15,900 won, an increase of 1,000 won. That might not sound so expensive, but considering that most customers are people who are retired, the price is quite high.

However, despite the increase, the buffet did not lose any customers. On Fridays and Saturdays, when many seniors gather, all 300 seats are fully booked a week in advance.

“Because the food ingredient prices have gone up, we have raised the prices to maintain the quality of food,” the restaurant’s manager Park Jung-sik explained. “Customers are quite financially stable, so we didn’t get any big complaints.”

The situation is about the same in Pagoda Town. Although the dishes offered there are relatively expensive compared to other bars in the area - the cheapest is 6,000 won - customers regularly fill the venue’s 600 seats on weekends.

Pagoda Town is popular because it has received positive reviews from seniors, and it’s often filled with trendy, nice people. Also, the manager arranges meetings between his customers when they come with friends of the same gender.

“Because there are only people around my age, I feel more comfortable,” said Son Jeong-won, 67. “And it is quite inexpensive that two people can have enough drinks and food for 30,000 won.”

The commercial area for seniors has also been expanding to Jongno 2-ga and 3-ga recently, with more seniors arranging meetings with friends at coffee shops in Insa-dong and in the nearby neighborhood.

Businesses have responded to more members of the silver generation seeking to look trendy and different by adding stores that stock fashion items such as shoes, hats and gloves. The neighborhood, which was formerly dominated by food-related businesses, has been transformed to provide all-inclusive services, from food to fashion to social activities.

“I’m not sure if this is due to a larger elderly population or if they just became more active, but I have about 40 percent more customers this year than last year that are looking around the items in the store,” said Seo Jeong-hee, an owner of a fashion store that sells comfortably adjusted hanbok (traditional Korean garments) in Insa-dong.

Besides restaurants, a nearby movie theater has been a hot spot among the regular visitors to Jongno.

The seniors-only theater, which opened in 2009, lets customers over the age of 55 watch movies for 2,000 won. The owner, who has opened similar theaters in Ansan, Gyeonggi, earlier this year and in Incheon last month, said that she wanted to provide a place where people can go as they age.

“I wanted Jongno to be the outlet where the elderly can find work and leisure activities,” said Kim Eun-ju. She decided to open a new and specialized theater after the one she was working in shut down and the older people working there were let go.

“There are so many of the elderly asking for jobs, and as [I’m running] a social enterprise, the No. 1 priority is to create more jobs,” Kim said.

As the employees are about the same age as the customers, moviegoers feel more comfortable coming in, and the theater has up to 1,300 visitors a day, up from about 200 a day when it first opened.

“There are many times we have seen all the seats from morning to late at night completely sold out,” she remembers.

Local experts have said that the areas near Jongno targeting the silver generation will flourish, just like the areas near Gangnam Station in southern Seoul and Hongdae in northwestern Seoul.

It is mainly because the elderly population keeps on growing as the society is aging. Also, Jongno is a major transportation hub easily accessible to anyone in the city - and it was the most vibrant part of town when people in their 60s and 70s were in their 20s and 30s. Hence, they are following in the footsteps of their memories.

“As they don’t pay any subway fare and have some time on their hands, the elderly living all around the Seoul metropolitan area gather in the Jongno area,” said Choi Hye-ji, a professor of social welfare at?Seoul Women’s University. “As there is a more diverse culture that people in a similar age range can enjoy together, commercial areas in Jongno are only going to grow in the future.”

In fact, as more and more seniors-only bars have been emerging, the premium fee that business owners must pay to get stores near Jongno 3-ga Station has gone up by more than 100 million won in the past two years.

“It was more like a deserted area because the younger generation did not come here, but it has been transformed into a luxurious area with a high premium fee where not every merchant can enter,” said one businessman at a store near Jongno 3-ga Station.

Given the fact that people in their 40s and 50s, who are more affluent on average than current seniors, will become the elderly in 10 to 20 years, many speculate that the Jongno area will grow even faster.

“Compared to the current elderly generation that is used to living a frugal life after they had experienced the [1950-53] Korean War and the Japanese colonial period, people in their 50s, who will lead the silver generation in a decade or two, are relatively open to spending more to enjoy their leisure time,” said an industry expert. “As they have experience in buying things to enjoy the popular culture, they have a higher will to work toward making themselves satisfied with life.”

Kim Suk-eung, a professor of business administration for the elderly at Sookmyung Women’s University Cyber Campus, agreed that the market will only grow from this point.

“The generation is firm about the idea that they will not give everything to their children, but to spend money on themselves, and also there are going to be more and more products and services targeting such people as they have more money in their pockets,” said Kim. “Hence, it can be possible to see a commercial area in Jongno that surpasses what we have in Gangnam Station or the Hongdae area.”

Also, the rise of the entertainment show, “Grandpas Over Flowers,” which features actors in their 60s and older, shows that the retail focus may shift to the older generation. The show follows four veteran actors as they travel to overseas countries such as France and Taiwan.

“Although the program shows people in their 60s, the majority of viewers of the program are people in their 40s and 50s who have seen those actors on TV when they were the young generation in the society,” said a research fellow at a local economic research institute who requested anonymity.

“By watching such programs, the next silver generation learns that aging is not a scary thing and they can think that taking trips overseas at that age with friends is also possible for them,” the fellow said.