Translator apps are quirky, but serviceable

Translator apps are quirky, but serviceable 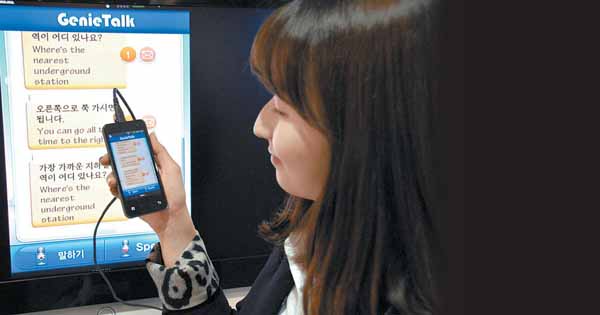 A foreigner in Korea may wonder what kind of a dish “dynamic stew” is when coming across it on the menu at a local restaurant.

As odd as it may sound in English, what it actually refers to is dongtae jjigae, or frozen Pollack stew. The reason why the restaurant used the word dynamic in English is because dongtae, depending on the context, could also mean dynamic in Korean.

The bad translation was a result of using an automated translator.

There are also other examples. 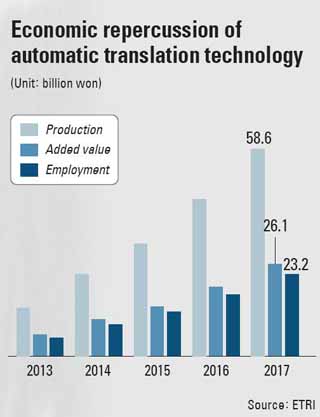 A Korean style beef tartare is pronounced as yukhoe but oftentimes it is wrongly translated as “six times.” Yuk in Korean refers to the number six while hoe refers to times.

There is also a case when gomtang, beef-bone soup, is translated as “bear soup,” as gom literally means bear and tang, soup.

Examples of bad Korean-to-English translations of local dishes at restaurants emerged as a hot issue lately among Internet users.

While some blame online and mobile translators that are equipped with relatively poor Korean language database programs for the bad translations, there are also some that say mobile applications can be useful while traveling overseas.

To figure out how useful online and mobile translators are for everyday use, the JoongAng Ilbo tried out two of the more than 10 free and paid apps available. The two are Google Translator, which provides service in 71 languages, and Genie Talk, a locally developed app by the Electronic and Telecommunications Research Institute (ETRI).

From a user’s perspective, both translators are based on similar processes.

When a user types or speaks a sentence and then selects a language, a translation shows up on screen in written message or by voice through the speaker.

When comparing the two in details, however, Genie Talk delivered better translations.

For example, when a phrase “Kimchi, I like” is inserted to the translator, the Genie Talk automatically recognizes the word “like” as a verb rather than an adjective as can be used in the Korean language, restructures the sentence in an English syntax to “I like kimchi.”

The application also doesn’t fail to translate a rather informal sentence into an understandable English form.

When the sentence “Kimchi, I like” is inserted with a Korean postposition “gah,” which means “is” in English, Genie Talk translates it to “A kimchi is good.” Although the grammar sounds awkward, the translator still delivers the correct nuance of “like.”

On the other hand, Google Translator translates the same sentence as “Okay kimchi,” failing to distinguish the two usages of “like” in the Korean language, which either could literally mean like or is interchangeable with “okay.”

Meanwhile, both apps have high quality voice recognition function, although they require a clear pronunciation and near-perfect grammatical elements, as if reading a textbook. When the pronunciation of “kimchi” is inaccurate, they recognize the word as “Mr. Kim,” which is pronounced as kim-ssi. They aren’t able to recognize `regional accents, either.

Although it is difficult to say which translator provides better sentences, Genie Talk offered a more natural translation, based on trials by the JoongAng Ilbo reporter.

For example, when inserting “I want some frozen pollack stew” in Korean, the Genie Talk translated as “I would like to eat the stew made with frozen Pollack,” while the Google Translator read it as “I want to eat steamed dynamics.”

“Genie Talk is based on a database with 270,000 Korean words and 65,000 English words, and we tried to make it more perfect with tens of patents the ETRI holds,” said Kim Sang-hoon, a manager of Automatic Speech Translation and Artificial Intelligence Research Center at ETRI. “Our app has translation functions that are 15 percent better than Google Translator.”

The Genie app, however, is only available on a mobile device and offers translation from Korean into just two languages: English and Japanese.

Google Translator, however, can be used also on a personal computer and translates words from different languages based on several billion words and text resources it has in its Internet database.

For example, when a sentence is inserted on Google Translator, it analyzes the word patterns based on different usages, finds similar patterns from its resources and suggests the closest sentence.