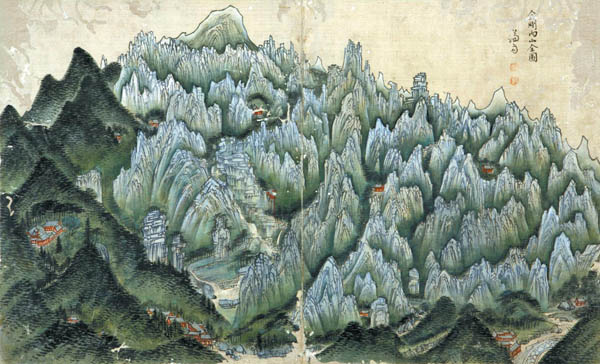 “Complete View of Inner Geumgang Mountain” by Korean painter Jeong Seon is one of 21 paintings returned from Germany in 2005 that are being shown to the public for the first time. Provided by Overseas Korean Cultural Heritage Foundation

A book of 21 paintings by renowned Korean painter Jeong Seon (1676-1759), which made a dramatic return home in 2005 from a German monastery, will debut to the public in a special exhibition at the National Palace Museum of Korea.

Norbert Weber (1870-1956), an abbot at the Benedictine Abbey of St. Ottilia in Emming, Germany, purchased the volume during a visit to Korea in 1925; it was kept at the monastery for 80 years before its return.

The exhibition, which kicked off its three-month run today, was organized by the Overseas Korean Cultural Heritage Foundation, an organization dedicated to reclaiming Korea’s cultural properties kept overseas.

In addition to the exhibition, the foundation also published two books - a replica of the book containing the 21 paintings, and a second publication with explanations of the artworks and essays on its repatriation.

“This marks the first time since the booklet was returned in 2005 that all of the paintings in the book are being shown to the public, and related materials and research have been compiled,” the foundation said.

Yu Joon-young, a former art history professor at Ewha Womans University, first revealed that the book was being kept at St. Ottilia’s Archabbey in his published dissertation.

Yu, who studied in Germany in the 1970s, found out about the book’s existence while reading one of Weber’s books on Korea. He went to the monastery in 1975 to see the paintings with his own eyes and published a dissertation on the subject the next year.

The book’s return, however, was thanks to Son Chi-hun, a priest at Waegwan Abbey, a Benedictine monastery in Chilgok, North Gyeongsang.

Son - who stayed at St. Ottilia’s Archabbey in the ’90s - convinced archabbot Jeremias Schroder that returning the booklet in 2005 would be meaningful, as it marked 100 years since Benedictine monks came to Korea to evangelize.

St. Ottilia’s Archabbey agreed to return the book as a loan, on the condition it would then take up permanent residence at the Waegwan Abbey.

“Although many Koreans are interested in repatriating cultural properties these days, they aren’t as interested in how they are being kept, studied and utilized after returning home, which is just as important,” said Ahn Hwi-joon, the foundation’s chairman. “This book of paintings is just the start. We hope to have similar projects with other repatriated artifacts from now on.”

The book, whose publication date is unknown, includes the “Complete View of Inner Geumgang Mountain,” which depicts an overall view of the inner area of Mount Kumgang, in present-day North Korea.

Besides depictions of the waterfalls and valleys around Mount Kumgang, the book also includes paintings of figures based on Chinese proverbs, as well as a painting called “Pine Trees in Hamheung Palace,” which refers to the trees planted by Lee Seong-gye (1335-1408) - or King Taejo, the founder of the Joseon Dynasty (1392-1910) - in Hamhung, present-day North Korea.

It is unknown when Jeong Seon - also known as Gyeomjae - made the 21 paintings, though some of them are believed to have been created in the later years of his life.

“It’s unclear how the book should be viewed - from left to right, like in the West, or from right to left,” said Cha Mi-ae, a manager in the foundation’s public relations division. “If you view the paintings from left to right, the story unfolds in line with Weber’s trip to Kumgang, but if you view from right to left, there is also a chronological story from the Chinese proverbs.”