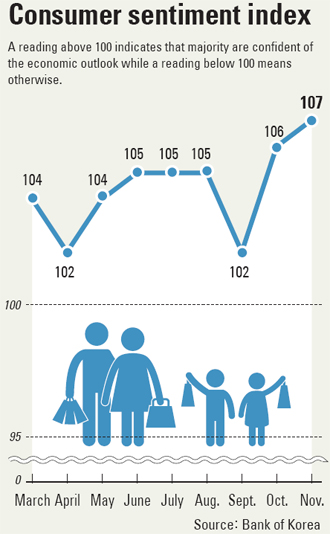 Consumers are finally thinking about opening their wallets as various economic indicators show signs of an improving economy.

It is the second consecutive month the index gained after falling in September by 3 points.

The index since January this year has remained above 100 after dipping to 99 in December last year.

The latest index was drawn out by conducting a survey on 2,200 households in 56 cities nationwide from Nov. 11 to 19. A reading below 100 indicates that there are more pessimists than optimists.

“The index shows that consumers feel the economy is on a recovery track, while at the same time they also hope the economy will continue to improve in the months to come,” said Park Sang-woo, an official from the Bank of Korea.

The increase adds to growing expectations that the domestic economy is on a recovery path after struggling in the aftermath of the global financial crisis.

Improving sentiments are being witnessed particularly in the retail industry.

Although many department stores across the country started sales seasons last week, Lotte and Hyundai claim that business is up by double digits compared to last year.