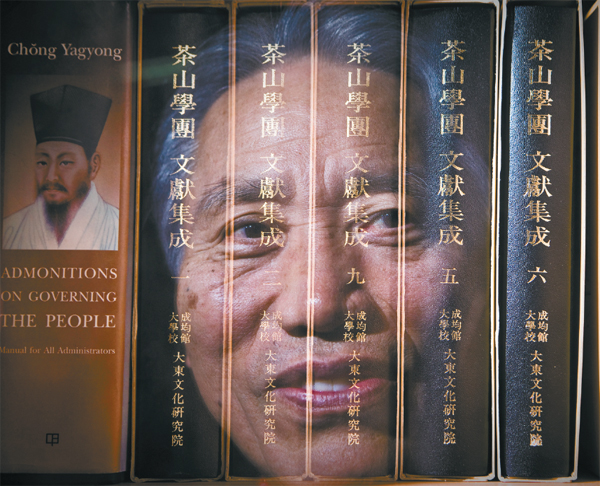 Park Seok-moo, chairman of the Institute of Dasan Studies By Kwon Hyuk-jae

Park Seok-moo, 71, has had many titles. He used to serve as a member of the National Assembly, elected in 1988 and 1992. He has been lecturing at Sungkyunkwan University from 2004 as a chaired professor. He also leads the Institute of Dasan Studies.

Of all his positions, running the Dasan Institute is probably one of Park’s favorites because he is so crazy about Jeong Yak-yong (1762-1836), a scholar of the late Joseon Dynasty better known by his pen-name “Dasan.”

Dasan is famous for writings on silhak, or “practical learning,” which arose as an alternative to neo-Confucian abstractions that were dominant in the later Joseon Dynasty (1392-1910).

“You are bound to go crazy once you know him,” said Park during a recent interview with the JoongAng Ilbo. “If you are still OK after knowing his whole life and achievements, you are the one who is crazy.”

The thinker from the late Joseon era passed away nearly 200 years ago, but Park believes his lessons and achievements are still worth upholding today - which is why Park retired from political life in 2002 to study more about Dasan.

At the time, Park was a candidate in the South Jeolla region for a liberal party, which would have pretty much guaranteed him a seat in an election in that strongly liberal part of the country. But Park decided to leave politics. Instead, he took up Dasan.

“I think it was an excellent decision,” said Park. “Studies on Dasan are worthy and attractive enough to surpass all the priorities of a politician.”

Since retiring from politics, he has been teaching all about Dasan and Dasan’s thoughts on leadership at Sungkyunkwan University for 10 years. He also transcribes Dasan’s books from Chinese characters into hangul, the native Korean alphabet.

Along with Dasan, Unesco recognized Jean-Jacques Rousseau, Hermann Hesse and Claude Debussy for their achievements.

Dasan became the first Korean who made the prestigious list.

Dasan was a polymath of the Joseon Dynasty. He was a poet, scholar, doctor, historian, educator, administrator, civil engineer, mathematician and geographer.

After the death of King Jeongjo, however, Dasan and his brothers were caught up in a wave of anti-Catholic persecution in 1801, and were forced into exile in Gangjin, South Jeolla. He was 40 years old at the time and lived in exile for 18 years. During that time, he published 530 volumes of books, tracks and other materials.

Here are some excerpts from an interview with Park.

Q. When was the first time you were enchanted by Dasan?

A. I grew up in a family with a Confucianism background. The reception room was always crowded with the guests of my grandfather and father. I was a little boy who had to carry food and alcohol from the kitchen to the reception room. That’s when I got to know philosophy and history. Dasan’s studies are all about philosophy and life, too.

Since I learned Chinese characters, I had no problem reading the books of Dasan. But a critical moment came when I got to read a poem of Dasan. It was titled ‘Ae-jeol-yang.’

What was it about?

I was a college student back then and it was under the military regime. The poem was about a farmer who had to cut his own sexual organ.

During the time of Dasan, people used to pay a head tax. The farmer was ordered to pay a tax for his newborn baby [after the tax collector saw] the baby’s umbilical cord stump. The farmer couldn’t afford to pay the tax for the newborn baby, so government officials confiscated a cow from the farmer. The cow was everything he had. The farmer eventually sharpened a knife and cut off his penis. There were no contraceptives back then and it was the only thing he could do as a helpless ordinary person.

The poem was shocking to me. We had many poets in the late 1960s and early 1970s who were critical of the government, like Kim Ji-ha, Ko Un and Yang Sung-wu, but none of them were as biting and scathing as Dasan. The poem had a clear message about [bad] politics, targeting the king’s family. I still think, ‘How was it possible to write such a poem at that time?’

Neo-Confucians used to believe people had four requirements - patience, manners, wisdom and justice. Those were very esoteric, but Dasan put a priority on practicality. He believed in studying things you could put into practice.

That spirit was well-reflected in his letters to his sons and daughters-in-law. He once wrote, ‘Be good to your mother and uncles. If you are filial to them, it makes me happy, even if I am living in exile, because you are putting your responsibilities as children into practice.’

You are lecturing on the leadership of Dasan. What type of leader was he?

When he served as a county magistrate in Goksan, Hwanghae, the villages were infested by a gang of bandits. The first thing Dasan did, instead of just trying to capture and punish the bandits, was dispatch a few officials to their hideout to find out why they started stealing.

Later Dasan found the bandits had formed an alliance with some county officials. Dasan punished all the officials and naturally solved the issue. Dasan always tried to solve fundamental issues first.

Dasan was well versed in many subjects, from humanities to natural science. How did he study?

He kept putting the things he learned into practice. He also saw mathematics as the foundation of all other studies.

He asserted that there should be a government-run institute that teaches mathematics.