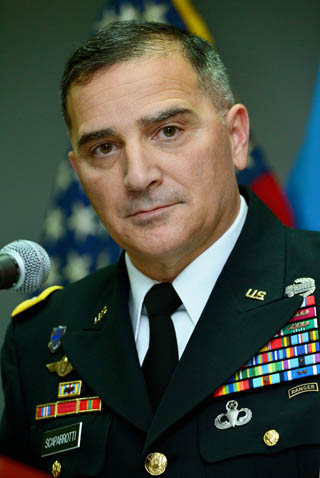 The United States is mulling over a plan to keep some of its frontline troops in areas north of Seoul for a more effective defense against threats from North Korea, according to the new commander of U.S. Forces Korea.

In a meeting with journalists yesterday at the Korea-U.S. Combined Forces Command in Yongsan, Gen. Curtis Scaparrotti discussed the transformation and realignment the American troops stationed here will face in the next few years.

He also touched upon the U.S. and South Korean militaries’ joint strategy to counter the North’s missile threats as well as the two countries’ military alliance.

The four-star Army general took over the command of U.S. Forces Korea in August. He is also the current commander of the United Nations Command and the South Korea-U.S. Combined Forces Command.

Gen. Scaparrotti said that keeping some of the forward-deployed, combat-ready soldiers from the 2nd Infantry Division in the areas north of Seoul was an option currently on the table.

“There may be a need operationally to leave some residual [staff] in those areas just for proper defense and response,” he said. “There has been no decision in that area… but we will work our way through and do what is best for Korea and what is best for the defense of Korea.”

If that plan is realized, it will be a shift away from an earlier agreement between Seoul and Washington on the massive realignment of U.S. troops in the South.

In the early 2000s, the United States decided to reposition its troops by consolidating its military bases. One of the major changes included the decision to pull American soldiers away from the inter-Korean border, abandoning the long-standing tripwire function of the U.S. forces.

The 2nd Infantry Division is tasked with defending the South until U.S. reinforcements arrive on the peninsula in the event of a North Korean attack.

By 2016, all troops of the 2nd Infantry Division stationed in Uijeongbu and Dongducheon, located north of the Han River, are scheduled to be repositioned to Pyeongtaek in southern Gyeonggi.

Gen. Scaparrotti also said a plan to create a combined division including both American and South Korean troops to prepare for the coming wartime operational control transfer is still under consideration.

“I think it is a strong possibility; I think it will be a strong additive to our alliance,” he said. “... And it is something that I will look into as well, and talk to the Republic of Korea leadership about.”

“One of the important parts of the [operational control] transition is that there are conditions that must be met,” he said. “As a military commander, that would be my focus.”

Gen. Scaparrotti added that the U.S. commitment to South Korea remains strong despite any challenges, which recently included cuts in the defense budget.

“The U.S. remains steadfast. Recently we have deployed an additional aviation battalion to Korea,” he said.

“We are fielding the most modern weapons systems in our inventory to Korea, and the readiness of our forces in Korea are prioritized second only to those in Afghanistan.”