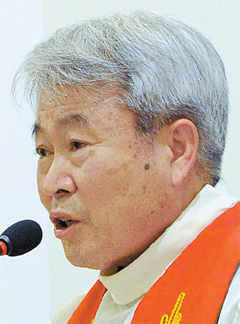 The prosecution opened an investigation into the left-wing priest who publicly condemned President Park Geun-hye and seemingly supported North Korea’s shelling of a South Korean island, following an uproar among angry conservative activists and priests.

The Jeonju District Prosecutors’ Office yesterday launched a probe into remarks by Park Chang-sin, a senior priest in the Jeonju diocese and a member of the Catholic Priests’ Association for Justice, a group of leftist priests, on suspicion of violating the National Security Law.

“We have not planned the details on our probe, but we could add more suspicions in the course of the investigation,” an official at the prosecutors’ office told the JoongAng Ilbo yesterday. “Currently, several conservative groups are holding rallies against him and planning to file accusations, so we have not decided which prosecutors’ office would be in charge of the probe.”

On Monday, a conservative group called Hwalbindan submitted a complaint against the priest to the Jeonju District Prosecutors’ Office claiming he violated the National Security Law by making the defiant speech Friday evening praising North Korea.

“The senior priest, Park Chang-sin, supported North Korea’s shelling of Yeonpyeong Island, denied the outcome of the presidential election and demanded the resignation of President Park Geun-hye,” Hong Jeong-sik, the head of the group, told reporters Monday at the Jeonju prosecutors’ office. “The prosecution should punish him by launching a probe.”

Hong also asked the prosecution to look into whether the priest was involved in the opposition Unified Progressive Party’s underground group, allegedly called the Revolutionary Organization, which is suspected of plotting a rebellion against the South Korean government earlier this year.

The prosecution said it would investigate why the priests held the Mass on Friday, at which Park’s comments were made, and check whether the priest’s comments violate the law.

In a local church in Gunsan, North Jeolla, Park called for the resignation of President Park and the arrest of former President Lee Myung-bak in order to take responsibility for the National Intelligence Service’s alleged smear campaign in last year’s presidential campaign.

Claiming the disputed Northern Limit Line (NLL) was a temporary demarcation by the United Nations Command to prevent the South Korean military from invading North Korean territory, Park said North Korea had no choice but to fire artillery at Yeonpyeong Island, shocking the public a day before the third anniversary of the shelling that killed four South Koreans and was the first land attack since the 1950-53 Korean War.

Other far-right civic groups submitted similar complaints or are planning to do so. The Young’s Liberty Union held a press meeting in front of the Supreme Prosecutors’ Office in southern Seoul yesterday before submitting their own complaint against Park.

The members claimed the priest “insulted the families of the soldiers killed in the Yeonpyeong shelling” and his comments were “violations of the National Security Law.”

Kim Gi-baek, head of the news provider, said, “The ultimate goal of Father Park is to overthrow the Republic of Korea by weakening the will of its soldiers and people to safeguard the security of our territory.”

A group of conservative priests called the Association of the Priests for Safeguarding the Republic of Korea said it was also considering filing a complaint.