Is Oh’s fastball good enough for him to dominate in Japan?

Is Oh’s fastball good enough for him to dominate in Japan? 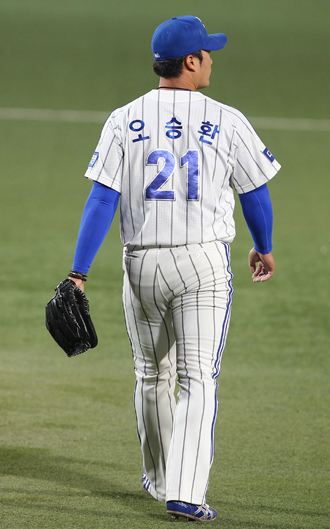 When a Doosan Bears’ runner reached first base with one out in the top of the ninth inning of Game 2 of the Korean Series against Samsung Lions, the Bears’ fans were hoping for a winning run. But the crowd was bitten by the sound of “Lazenca Save Us,” the theme song of the popular Korean animation “Soul Frame Lazenca” that aired in 1997.

Since 2005, when the 31-year-old right-hander made his KBO debut, the music has usually meant a win for the Lions and a loss for their opponents. Game 2 looked like it would go the same way, at least until top of the 13th inning, as he retired 12 straight Bears’ hitters, with eight strikeouts. But the Lions lost the game, 5-1, as he gave up a solo home run to Bears’ pinch-hitter Oh Jae-il on a 150-kilometer-per-hour (93.2-mile-per-hour) high fastball. Lions’ skipper Ryu Joong-il replaced Oh after he threw 53 pitches, his longest outing since a 2008 game against the Kia Tigers.

Though the Lions lost the game, Oh dominated four innings with his fastball and slider, both of which were nasty enough to knock out the Bears’ hitters.

Last week, Oh signed a 2-year, 900 million yen ($8.9 million) deal with Japan’s Hanshin Tigers. In nine seasons with the KBO, Oh has a 1.69 ERA in 444 games, with 28 wins, 13 losses, 277 saves and 625 strikeouts. In the Lions’ last five Korean Series titles since 2005, Oh allowed only three runs in 33 and one-third innings with 11 saves and a 0.81 ERA. The biggest question he faces now is whether he can be a dominant closer in Japan with his so-called “rock fastball.” About 80.3 percent of his pitches were four-seam fastballs, according to the KBO.

“His four-seam fastball danced like crazy on that night,” Bears designated hitter Hong Sung-heon said. “When I see his incoming fastball, it moves like a rising fastball and the more embarrassing thing is that it feels like I’m hitting something like a hard rock every time I hit his fastball. Some hitters use a lighter bat to hit his fastball, but such an attempt was just useless. Some analysts tell us to hit his slider rather than fastball, but that isn’t as easy as it sounds because every time we wait for the slider, his rock fastball penetrates into home plate and kills us. The best way for us was to cut as many of his fastballs as we can and it was kind of lucky for us that Lions’ skipper Ryu made him pitch his fifth inning of the game.”

According to “Sports2i,” which provides official statistical information to the KBO, Oh’s average four-seam fastball speed in the 2013 season was 150.02 kilometers per hour and it had an average up-and-down movement of 29 centimeters (11.42 inches) until it approaches home plate. The other pitchers in the KBO averaged 24 centimeters this season in this category.

“Our Pitching Tracking System, which we have in every ballpark this season, found that Oh’s fastball movement got even better in the Korean Series,” a staff member of Sports2i told the Korea JoongAng Daily. The record says his fastball had an average of 37 centimeters of up-and-down movement during the series while other pitchers averaged 28 centimeters.

“Every time I visit Korea, reporters always ask me whether his fastball would still be a competitive weapon,” a scout of a big league team said. “One thing I want to say is that teams interested in acquiring Oh don’t doubt Oh’s fastball. The more important thing is his second pitch [slider].” His second pitch is an 83-86 mph slider, according to Sports2i. “I judge that Oh has mastered his fast slider in the past few seasons, but he didn’t use it often because he didn’t have to in the KBO,” said baseball analyst Kim Jung-jun. “And one more interesting thing is that I see some changes on his fastball.”

Kim said that Oh’s fastball often moves like a sinker to right-handed batters and like a cut fastball against lefties. “I think he intended such changes since he faced Japan’s Softbank Hawks in the 2011 Asia Series. I think he felt it is necessary to have more weapons to survive in a foreign league.” In that series, Oh, whose slider wasn’t sharp enough, had a hard time retiring Japanese hitters, who fouled off many pitches and scored two runs in the bottom of the ninth inning.

The up-and-down movement of Oh’s fastball is one of the best in any league, but surprisingly, it has decreased by 7.3 centimeters in the last three seasons. Meanwhile, its side-to-side movement has increased by more than 10 centimeters, from 6.96 centimeters to 16.52 centimeters. The KBO average in this category in this season was 11.29 centimeters.

“It looks like he has developed a style to survive in a foreign league team in phases,” Kim said. “And because he’s one of the best closers in locating pitches, it is just time to show his stuff. I think his slider and sinking fastball would be good enough to be compared with Koji’s forkball that drew tons of strikeouts.”