FSC scales back its financial vision

FSC scales back its financial vision 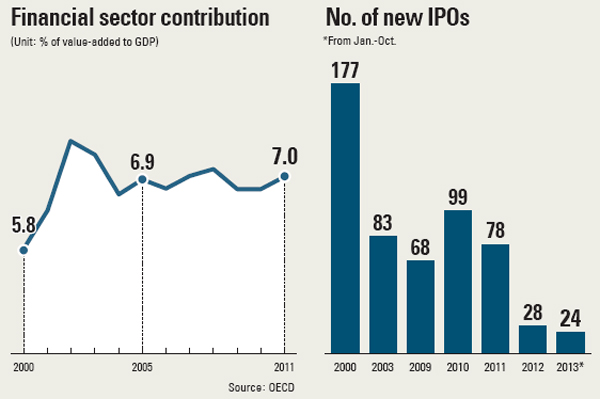 Financial Services Commission Chairman Shin Je-yoon had a determined look as he stepped into the press room yesterday to give a briefing on government measures to boost the competitiveness of Korea’s financial industry.

Eight months have passed since the former vice finance minister joined the FSC in the top seat with visions of making Korea’s financial industry stronger and more influential on the global stage.

However, market conditions at home and abroad have remained unfavorable for the aggressive implementation of policies for the good of the financial industry.

There have been scandals that have brought criticism of the regulator for not fulfilling its role, most recently involving the debt-ridden Tongyang Group and alleged irregularities at KB Kookmin Bank. 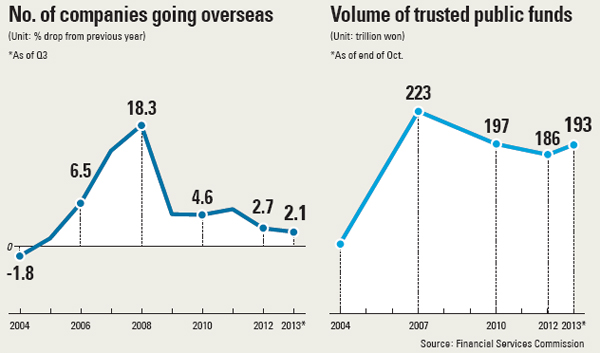 The challenges facing the regulator have resulted in a revision of its outlook for the financial industry.

Rather than stating a rosy vision like nurturing Korea’s own Goldman Sachs or making Korea a global financial hub, the measures he shared were more pragmatic, dealing with the feasibility of policies based on the current financial environment, and involved more short-term goals.

For example, measures announced by the FSC include implementing a new system in which consumers are offered more convenient service when they change their main bank accounts by allowing financial transfers like monthly pay and bill payments to migrate to the new account automatically.

“It is difficult to say that local financial institutions are fully competing with each other, as they lack strategies of their own when it comes to operation,” said an official from the regulator.

“After the sales process of Woori Bank is complete, the industry will be led by three to four banks, creating limited competition.”

According to the FSC, the market share of Korea’s four largest banks is 55 percent, far lower than other countries like Australia (87.7 percent), the United Kingdom (82.2 percent) and Canada (75.5 percent).

“The financial industry is facing a big change of paradigm,” Shin said. “Korea’s economy has entered a maturity stage and the population is aging. … If we settle for past financial practices, then we will no longer be able to make a profit or develop.”

Based on its vision to “upgrade the financial industry by boosting unlimited competition,” the FSC stated a clear goal of increasing the value added by the financial sector to the country’s gross domestic product by 10 percent within 10 years. The current figure stands at 7 percent.

“The financial sector should break away from a thought that focuses only on growth and rather try to build internal stability,” Shin said.

Other measures include deregulating the financial investment industry so there are more mergers and acquisitions taking place in the market.

Also, the FSC said it will allow insurance companies to be involved in businesses that lure foreign medical tourists so that they are given new profit sources.