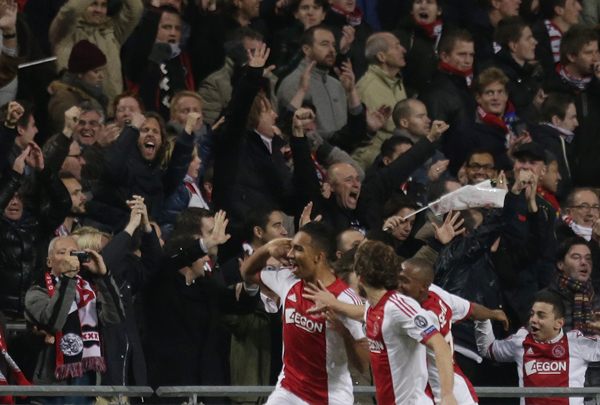 Ajax Amsterdam stayed in contention for the last 16 of the Champions League after becoming the first side to beat Barcelona this season with a 2-1 triumph on Tuesday.

Thulani Serero and Danny Hoesen scored to give Ajax a surprise halftime lead, but straight after the break defender Joel Veltman was red-carded for a tackle on Neymar and Xavi pulled a goal back from the penalty spot.

Injury-plagued Barcelona, which had already qualified for the knockout stages from Group H, applied pressure in search of an equalizer but Ajax held out to wild applause in Amsterdam Arena.

“I said Ajax would be the first team to beat Barcelona with the football we always want to play, which is attacking football,” said Ajax manager Frank de Boer.

“After the sending-off it became difficult and dangerous but we showed our lion’s heart.”

Ajax stays third in the group, one point behind AC Milan, who they must now beat away on Dec. 11 to qualify.

“We had a good feeling before the game and that’s why we started well. We were playing probably the best team in the world, so what did we have to lose?” Hoesen said.

Barcelona, without the injured Lionel Messi, is two points clear and not yet sure of top place.

Barca coach Gerardo Martino said: “In the first half, we didn’t have a good attitude. At an individual level we were not as good as Ajax.”

Serero ghosted in late for the first goal in the 19th minute, applying the decisive touch to a strong cross from the right from fullback Ricardo van Rhijn, who five minutes earlier had made a goal-saving tackle on Neymar.

The South Africa international’s first Champions League goal precipitated a period of sustained pressure from the young Dutch side, culminating in a second goal three minutes from halftime.

A poor clearance by Javier Mascherano allowed Ajax to set up a chance for Viktor Fischer, whose shot was parried by goalkeeper Jose Manuel Pinto, only for Hoesen to pick up the rebound, go round Carles Puyol and score with the help of a deflection off Gerard Pique.

An Ajax fan was seriously injured after falling 10 meters from the stands as he celebrated the goal. He was taken to a hospital.

But the comfortable cushion deflated just two minutes after the break when Van Rhijn’s poor back pass sent Neymar away and Veltman tripped him on the edge of the area, conceding a penalty and getting himself sent off.

Xavi converted the spot kick to send Ajax into defensive mode. They kept Neymar at bay and ensured the Brazilian has yet to open his Champions League scoring account.

“We knew we had to be compact and keep playing after the penalty. It was a silly mistake,” said Serero.

It was Barcelona’s first defeat under new coach Martino and ended hopes of a record-equalling, longest unbeaten start to a season.

The Spanish club had gone 20 games without defeat, one shy of the record set by Pep Guardiola’s 2011-12 side. They last lost at home to Bayern Munich in last season’s Champions League semifinal.

A late goal by Basel’s Mohamed Salah condemned Chelsea to a shock 1-0 defeat in the Champions League on Tuesday, although the 2012 title winners still qualified for the knockout stages. Basel’s double over the English side gives them eight points in Group E, one fewer than Chelsea. They visit Schalke 04, who drew, 0-0, with Steaua Bucharest and have seven points, next month to decide which one joins Chelsea in the last 16.