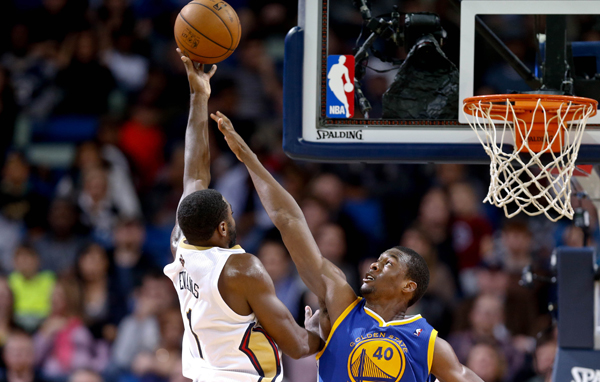 Klay Thompson scored 22 points and tied a career high with eight assists, and the Golden State Warriors snapped a three-game skid with a 102-101 victory over the New Orleans Pelicans on Tuesday night. Eric Gordon had a chance to win it for New Orleans with an open 3-pointer from the left corner in the final seconds, but the shot rimmed out and Anthony Davis couldn’t quite reach the rebound.

Jermaine O’Neal returned from right knee and groin injuries that had sidelined him for four games and did not look at all rusty, sinking his first seven shots en route to 18 points - including a clutch baseline hook with 2:06 left. David Lee added 19 points.

Ryan Anderson had 21 points and 12 rebounds for New Orleans. Davis finished with 14 points and 11 rebounds.

Stephen Curry struggled to find his usual accuracy, missing 13 of 20 shots, but scored seven of his 16 points in a tight fourth quarter for Golden State. Harrison Barnes added 14 points.

New Orleans appeared to be seizing momentum when Davis’ dunk on a pick-and-roll feed from Tyreke Evans tied it at 93.

Golden State called a timeout and responded with O’Neal’s basket and Thompson’s 3. Jrue Holiday, who had 17 points, hit a big 3 for New Orleans, and the Pelicans eventually pulled to 100-99 when Davis tipped in an alley-oop pass as he was fouled by Curry.

After O’Neal scored the go-ahead basket, Davis once again pulled the Pelicans within a point with his vigorous, one-handed putback jam of Evans’ miss. But there was no more scoring after that.

Gordon finished with 16 points for the Pelicans, who have lost two straight. Jason Smith had 14 points and Evans had 12.

New Orleans trailed by as many as 15 in the second quarter but took a 68-65 lead in the third with an 8-0 run that included six straight points from Gordon on a 3, a free throw and a 21-foot jumper.

The Warriors briefly regained a four-point edge, but Anderson’s third 3 of the game and Evans’ spinning layup put the Pelicans up 77-76 heading into the final period.