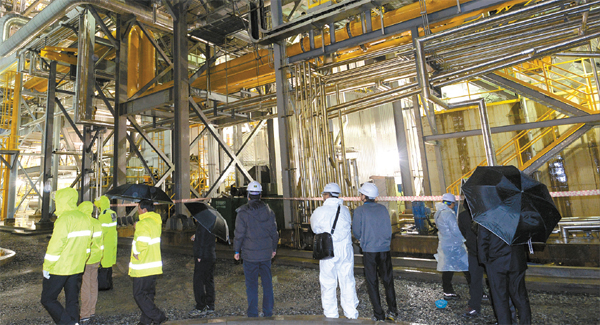 A gas leak at a Hyundai Green Power plant in Dangjin, South Chungcheong, killed one worker and injured eight.

The fatal accident happened on Tuesday evening inside a Hyundai Steel plant where Hyundai Green Power was building its seventh power furnace. Hyundai Green Power is a company that generates power by using blast furnace gas (BFG) that is a byproduct of steel-making.

The company’s seventh power furnace was scheduled to be completed by March and Daewoo Engineering & Construction is the builder.

The workers killed and injured on Tuesday night were employees of sub-contractors of Daewoo E&C.

According to the company and Dangjin Police Station, the accident occurred while workers were inside a BFG preheater repairing gas pipes and were overwhelmed by gas.

The police, National Forensic Service and Korea Gas Safety Corp. are conducting a joint investigation to fdetermine the exact cause of the gas leak and accident. The Dangjin Police Station is focusing on whether the company complied with safety regulations and whether employees wore masks and used gas leak alarms.