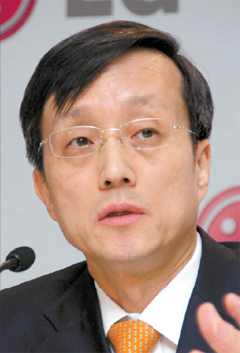 LG Electronics promoted Park Jong-seok, head of the Mobile Communications unit, to be a president of the company yesterday despite a loss in its handset business in the third quarter.

The company posted 3.45 trillion won ($3.25 billion) in sales in the Mobile Communications division from July through September, down 2 percent from the second quarter. During the same period, LG Electronics fell from third to fifth in the global smartphone market, according to Strategy Analytics.

David Jung, the Seoul-based company’s chief financial officer, was also promoted to be a president, it said. Both Park and Jung will remain in their current positions.

LG Electronics “has strengthened the responsibility-based management system to break through the crisis we are facing by empowering the existing management,” the company said in a statement.

The company, however, replaced Kwon Hee-won, head of its home entertainment business, with Ha Hyun-hoi, formerly head of IT business at LG Display, who also was promoted to be a president.

Park, 55, a former head of the company’s mobile phone R&D operations, has led the transition of its flagship smartphone brand from the Optimus line to the G line since he took the helm of the division in 2010.

He released the transitional Optimus G in September 2011 and the Optimus G Pro in February before introducing the G2 in August. The company posted an operating loss of 79.7 billion won in the third quarter, mainly due to marketing costs for the G2.

Also under Park’s leadership, the company rolled out the G Pad 8.3 last month, its first tablet in nearly two years. It also released the G Flex, a curved smartphone, and manufactured Google’s latest smartphone, the Nexus 5, which went on sale in Korea last week.

Eight other senior executives in the Mobile Communications division also were promoted in the LG Electronics’ personnel reshuffle yesterday, including Chang Ma, who was appointed to head U.S. marketing for the division.