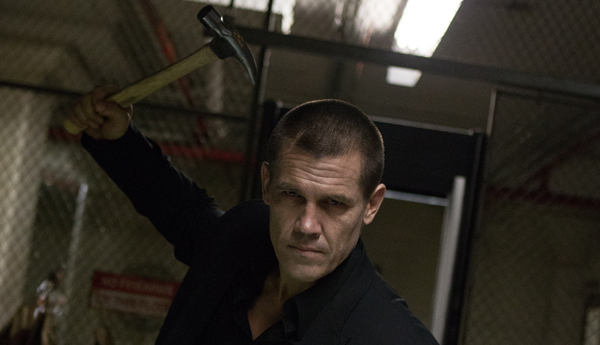 This image released by FilmDistrict Pictures shows Josh Brolin in a scene from “Oldboy.” [AP/NEWSIS]

Nobody ever accused Spike Lee of an overabundance of subtlety.

He’s an unapologetically bold filmmaker, one who hasn’t shied away from using a tattered American flag or a “Dead End” sign as hard-to-miss metaphors. But this also works to his benefit: Lee’s films rarely fail to leave an impression.

So that Lee would take on a remake - or “reinterpretation,” as he calls it - of Park Chan-wook’s grotesque revenge melodrama “Oldboy” is perhaps fitting. He’s one of few filmmakers who would take the original’s famous, lengthy tracking shot of a hammer-wielding beat-down of a hallway of bad guys, and triple it. (The shot has, against Lee’s wishes, been trimmed slightly.)

The 2003 Korean original, part of Park’s “vengeance trilogy,” already enjoys a fervent cult following in the United States, so the usefulness of an English-language redo 10 years later is questionable. Particularly when the original is such a sadistic slice of perversity, one in which an octopus was infamously swallowed alive.

Lee, to his credit, has not done much to smooth over the tentacles of the original. He’s transplanted the film to New York’s Chinatown, where Joe Doucett (Josh Brolin) is a low-rent, alcoholic advertising executive and absentee father. In the opening scenes set in 1993, he skulks the streets guzzling vodka and urinating in plain daylight.

After he blows a big deal (Lance Reddick of “The Wire” makes a welcome cameo), Doucett is soon knocked out and abducted. He awakes in a window-less hotel room that will be his prison for the next 20 years, a sentence handed out without explanation and by an unseen judge. He’s fed dumplings daily and watches history pass on television. A tabloid TV show regularly informs Doucett that, since he was locked away, his ex-wife has been murdered and he’s the prime suspect.

When he’s finally let out, dropped in a suitcase in the middle of a field, he makes a beeline for revenge, tracking his captor through his choice of take-out, sampling Chinatown’s dumplings but, alas, not its octopus.

Once Doucett finds his cell (part of a for-hire network overseen by a fro-hawked Samuel Jackson), Lee does his version of the hallway hammer scene with much more elaborate fight choreography. It’s a telling difference: Park’s violence feels so gruesome because of its crudeness, its fleshiness.

In his pursuit of both revenge and redemption, Doucett is aided by a bartender friend (Michael Imperioli, whose great talent has been underserved since “The Sopranos”) and a good-hearted social worker (the alluring Elizabeth Olsen, adding tremendous warmth to the film despite a part lacking complexity). Doucett’s former captor, played by Sharlto Copley like a Bond villain with Backstreet Boy facial hair, reveals himself early in Lee’s film, daring Doucett to figure out his identity and the reason for his imprisonment.

With screenwriter Mark Protosevich, Lee has preserved the basic plot of the original, and leads it to its grim, big-reveal showdown. And he gets a dedicated performance out of Brolin.

But “Oldboy” doesn’t bear much of Lee’s characteristics (it’s not labeled a Spike Lee “joint,” after all), though it can be entertaining, in a remake study kind of way, to see how he contorts an already much-contorted story into his own film. He has a less stylized sense of character and has brought the film into a more realistic world.

But much of the dialogue is stilted (several scene are laughable) and the melodrama feels unmoored without the lurid, baroque atmosphere of Park’s film - which, after all, was kind of the whole point. Lee feels lost here, too aware that “Oldboy” isn’t really his movie.

“Oldboy,” a FilmDistrict release, is rated R by the Motion Picture Association of America for strong brutal violence, disturbing images, some graphic sexuality and nudity, and language.