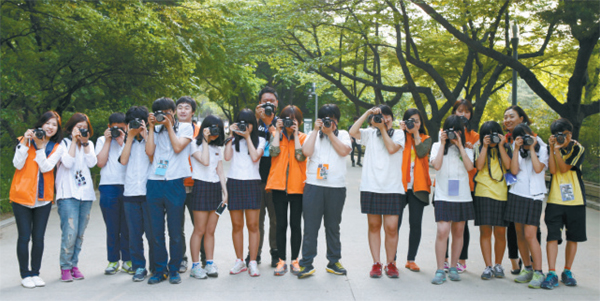 Children pose during a photography class of “Hanwha Art Plus” program. Instructors and employees teach art and culture classes to underprivileged children.

With big companies in the public spotlight for how well they carry out corporate social responsibilities, CSR programs have become more and more creative. Companies are contemplating how to develop programs that reach a larger portion of society and leave a long-lasting impact. Hanwha Group has been quite successful in this matter, especially with its “Hanwha Art Plus” program.

The Hanwha Art Plus program provides underprivileged children with art education, aiming to boost environmental consciousness in their minds. Jointly run by Hanwha Group and Korea Mecenat Association, it started off as a culture and art education program in 2009, and added the environment as a theme in 2012. In addition to the 87 special instructors, more than 3,000 Hanwha employees are voluntary assistants and 1,200 children from 62 welfare institutions across the country participate in the program.

The program shows consistency with Hanwha’s other CSR projects. The company funds several other programs, such as Seoul Arts Center’s Orchestra Festival and the 11 O’Clock Concert to support the performing arts.

As a core part of the Art Plus program, special instructors guide children to freely experience nine different genres of art, including media art, storytelling, music, drawing, photography, dance, plays, crafts and design. At its latest event on Nov. 12, children performed a play called “Mission from the future: Protect the Earth!” Hanwha said the children were able to practice what they learned in storytelling, drawing and design classes, as well as take charge of scriptwriting, makeup and props.

Hanwha stressed that multiple benefits in different aspects differentiate the Art Plus program from other CSR projects, citing recent research. A research team led by Kim So-young, professor of business administration at Sookmyung Women’s University, announced such results after examining 250 children and 298 Hanwha employees who participated in the program in the past year.

In the annual research conducted since 2009, the team found that the children’s creativity and emotional intelligence levels were higher than last year’s, and levels of depression also decreased.

According to the research, environmental awareness had been improved for both children and employees. Furthermore, employees felt stronger loyalty to Hanwha; individuals with a higher participation rate recorded a higher sense of belonging and satisfaction for their work. The program also contributed to job creation for the instructors in the long run, added the company.

Such efforts were officially acknowledged when the Hanwha Art Plus program was rewarded with the grand prize at the 2011 Mecenat Conference and Awards. Consistent investment in culture and art as part of CSR activities seems to be paying off for Hanwha.

“The Art Plus program is beneficial for all those both directly and indirectly involved,” said Lee Byung-kwon, executive director of Korea Mecenat Association. “It is an exemplary case illustrating that long-term investment and strategic planning is essential for infusing culture into CSR.”