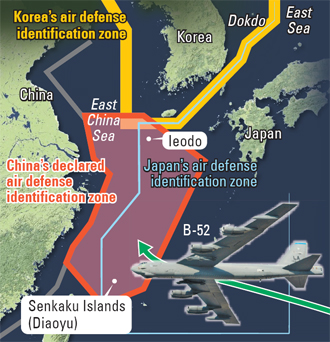 The United States flew two B-52 bombers over disputed islands in the East China Sea without prior notification in defiance of Beijing’s newly declared air defense identification zone.

The flights escalated tension in the Northeast Asia region, leaving Korea in an awkward position.

The unarmed U.S. Air Force B-52 planes flew several hours from Guam overnight Monday and remained in China’s air zone for about an hour, according to Pentagon officials. The aircraft flew about 200 kilometers (124.3 miles) from islands claimed by both China, who calls them the Diaoyu islands, and Japan, who calls them Senkaku.

The B-52 flights were part of a long-planned exercise called Coral Lightning, U.S. officials said, but analysts saw the move as support for Japan and a rebuff of China’s new air zone.

China proclaimed a newly mapped air defense identification zone over the East China Sea Saturday that overlaps with areas claimed by Seoul and Tokyo, resulting in protests from both countries.

The United States also responded critically, with both U.S. Secretary of State John Kerry and Secretary of Defense Chuck Hagel calling the move “destabilizing” and an “escalatory action” that can increase tension in the region.

In October, Japan and the U.S. agreed to modernize their defense alliance guidelines for the first time since 1997.

White House spokesman Josh Earnest told reporters Tuesday, “Inflammatory rhetoric and inflammatory policy pronouncements like those made by the Chinese over the weekend are counterproductive” and that they have “a destabilizing impact on the region.”

Australia also lodged a complaint with its Chinese ambassador.

China has responded to both countries complaints as “irresponsible” remarks.

The Chinese Defense Ministry yesterday released a statement saying that it detected and monitored the two U.S. B-52 bombers that flew over the East China Sea, which were in its air defense zone for two hours and 22 minutes.

Beijing has said it would take “defensive emergency measures” against aircraft violating the policy and emphasized yesterday that it can “exercise effective control over the relevant airspace.”

While the B-52 incident was a matter between China and United States, a Korean foreign affairs official said, “it is not an issue unrelated to security on the Korean Peninsula.” He said Seoul is “monitoring the situation closely.”

Although technically not an island, it is located in the overlapping exclusive economic zones (EEZs) of Seoul and Beijing and is also strategically located between China, Korea and Japan.

Japan also shows no sign of backing down, with talks of extending its air defense zone further eastward, possibly to include Korea’s Dokdo islets in the East Sea, which Japan claims and calls Takeshima.

Korea is caught in an uncomfortable situation sandwiched in between Japan, with whom it has historical and territorial disputes, and China, with whom Korea has never had closer bilateral ties.

On Tuesday, Japan’s ruling party’s foreign affairs and defense committees met with related ministry officials in a closed-door meeting to discuss how to respond to China’s new air zone.

A source told the JoongAng Ilbo that the ruling Liberal Democratic Party’s Masahisa Sato, a senior lawmaker on the defense committee, said that Takeshima and the Kuril Islands, “both lie outside Japan’s current” air defense identification zone.

He added there is a need for Japan to “reestablish” its air defense zone.

The LDP lawmakers on the foreign affairs and defense committees wield a lot of influence on the government’s foreign and security policies, which could mean a plan to establish a Japanese air zone that includes Dokdo.

China likewise is in discussions to further extend its air defense identification zone around the South China Sea, which could raise concerns for other neighboring countries including Vietnam, Taiwan and the Philippines.

Defense Minister Kim Kwan-jin said Tuesday that the ministry will review the inclusion of Ieodo in Korea’s air defense identification zone, stating, “Because we effectively control it, there have been no issues defending the jurisdiction of waters around Ieodo until now.”

Chung Mong-joon, a Saenuri Party lawmaker, said yesterday at a meeting held at the National Assembly that, “China including Ieodo in its air defense identification zone is a sign of our indifference and incompetence.”

Chinese claims that Ieodo is a submerged rock, not an island, and is therefore not considered disputed territory.

“Located smack in the center of the changing situation in Northeast Asia, Korea is sandwiched between the solidifying U.S.-Japan relationship and ceaseless China,” Saenuri Representative Choung Byoung-gug, a former culture minister, said at the same meeting, “and our foreign affairs authorities are stuck in a rut.”

Cho Tai-young, spokesman of the Ministry of Foreign Affairs, said at a briefing yesterday, “The Ieodo issue is an issue of the jurisdiction of surrounding waters, or in other words, the exclusive economic zone.”

In regards to reports that Japan is looking into expanding its air defense zone to incorporate the Dokdo islets, Cho said, “Such a notion is an absurd one and cannot be overlooked.”

The issue of the Chinese expanding its air defense identification zone further, he said, has already been raised at the National Assembly.