Chun family’s art trove is up for auction

Chun family’s art trove is up for auction 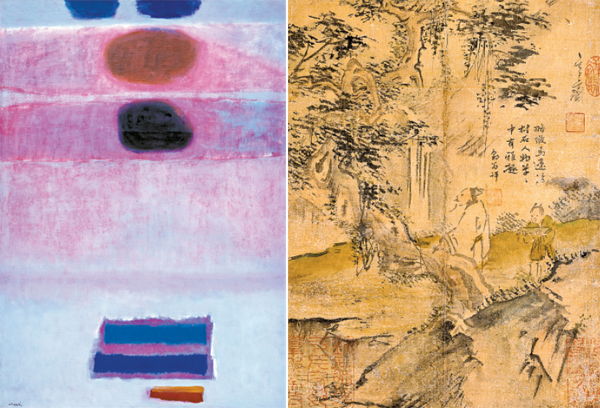 Kim Whanki’s painting, left, and a book of Joseon-era paintings including one by Sim Sa-jeong, above, are two of the highest-estimated artworks among the collection of former strongman Chun Doo Hwan and his family that will be auctioned. Provided by the auction houses

The private art collection of former strongman Chun Doo Hwan and his family will go on the block next month.

Among some 600 pieces of art confiscated from the former president and his family to pay a massive fine for his misdeeds, 235 pieces worth at least 3.7 billion won ($3.5 million) will be exhibited at Korea’s two major art auction houses and will be sold in December.

Prosecutors commissioned Seoul Auction and K Auction to sell the 600 works over the next few months.

In a press meeting yesterday, K Auction unveiled the plan to offer 80 artworks estimated at a minimum of 1.7 billion won in the first round of the sale at the company’s exhibition hall in Sinsa-dong, southern Seoul, on Dec. 11.

The works range from popular contemporary artists’ works, including acrylic paintings by Korean Oh Chi-gyun and a silk screen print by Briton Damien Hirst, to Korean folding screens of the Joseon era (1392-1910). They will be open for public viewing from Saturday to Dec. 10.

The highest auction estimate is for “24-VIII-65 South East,” an abstract oil painting by Kim Whanki, one of the titans of Korean modern art. It is estimated to sell from 450 million won to 800 million won.

“The Chun family collection that we have been commissioned to sell consists of works of diverse quality,” said Lee Sang-kyu, chief executive officer of K Auction. “They include not only valuable works by famous artists but also some works by amateur artists that the family kept as souvenirs and virtually have no market value. We need to talk with the prosecutors about this.

“We put many of the valuable ones in the first round to attract public attention,” Lee said. He said the allocations to his company and Seoul Auction have similar values.

As for Seoul Auction, it will offer double the number of artworks in its first round scheduled for Dec. 18 at its headquarters in Pyeongchang-dong, central Seoul. The auction house said in a statement yesterday it will also exhibit the works to the public at its Gangnam branch in southern Seoul from Dec. 6 to 11 and then at its headquarters from Dec. 14 to 17.

Its highest estimated is for a book of 16 paintings by nine important late-Joseon painters, including Jeong Seon and Sim Sa-jeong. It is estimated to sell from 500 million to 600 million won.

Another must-see is a large, colorful oil painting depicting an orchard by Korean modern artist Lee Dai-won. It is well known for having long hung on the wall of the former strongman’s house. It is estimated to sell for 300 million won to 400 million won.

Considering that the total estimate for the first round of sales at the two auction houses is about 3.7 billion won (those should be the most valuable works from the Chun family collection), the final yield from the sales might be lower than the prosecutors estimate.

In October, a prosecution team said the art collection would be worth a total of 10 billion won.

The sale is part of the sale of assets, including real estate properties and stock confiscated from the Chun family.

After 16 years of dodging the law, the Chun family finally relented in September and agreed to pay off an outstanding fine of 167.2 billion won, and offered up a list of assets the state could seize.

The move came after a special investigation team was launched for the purpose of collecting assets from the former president in May and the passing last June of the so-called Chun Doo Hwan Act, which allowed the state to confiscate assets not only from Chun but also family members and associates who acquired wealth from him.

In 1997, Chun was convicted of accepting bribes and running slush funds during his seven-year presidency and sentenced to life in prison.

He was ordered to pay a 220.5 billion won criminal fine.