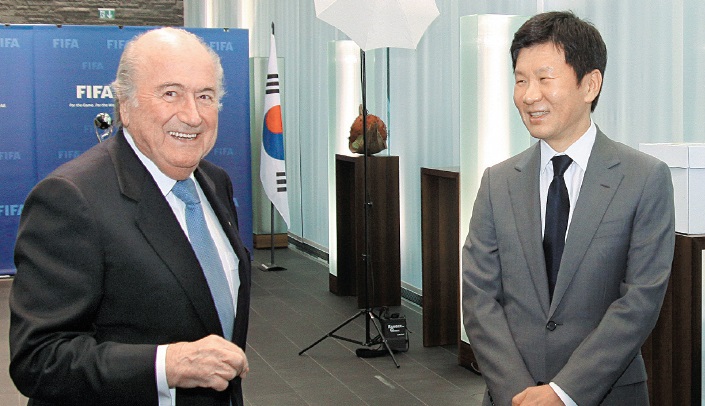 Korea, which successfully hosted the 2002 World Cup with Japan, is trying to host the U-20 World Cup.

Chung Mong-gyu, 51, the chairman of the Korea Football Association, has been jetting around the world recently to drum up support for Korea’s bid to host FIFA’s U-20 World Cup in 2017. The U-20 event began in Tunisia in 1977 and is FIFA’s second-longest-running event after the World Cup. Korea was one of the top four countries in the 1983 event in Mexico under the leadership of coach Park Jong-hwan. Many football superstars, such as Diego Maradona and Lionel Messi of Argentina and Thierry Henry of France, have participated in the event.

The host country for the 2017 event will be decided on Dec. 6 in Brazil. Twenty-five members of FIFA will cast a ballot and Korea has 11 competitors, including Saudi Arabia, Bahrain, England, France, Poland, Mexico, and Azerbaijan.

Korea is considered as one of the four leading contenders, along with England, Azerbaijan and Mexico.

“It is hard to predict the result,” a spokesman of the KFA said. “But we are expecting good news.” He said that Mexico is bidding to build a relationship with FIFA so that it can host FIFA’s general meeting and Azerbaijan, which jumped in the race later than the other countries, is busy preparing a bid to host the 2024 Summer Olympics. Some said England’s real purpose of bidding for the U-20 event is to develop close relations with FIFA in order to host its second World Cup since 1966.

Chung became the chief of the KFA in January and pledged that he will strengthen Korean football’s diplomatic competitiveness in the world. The country has been losing its influence since his older brother, Chung Mong-joon, 62, the former KFA chief, lost his bid to become FIFA’s vice-president in 2011.

Chung Mong-gyu met Joseph Blatter, the chief of the FIFA, in Switzerland on Nov. 14 and submitted Korea’s application for the event. The KFA has projected it would spend about 12 billion won ($11.3 million) to 15 billion won for the event without receiving any subsidies from the central government. About 3 billion won to 4 billion won would be provided by FIFA, with the rest coming from the KFA. Officials from nine cities - Seoul, Suwon in Gyeonggi, Incheon, Daejeon, Ulsan, Pohang, Jeonju, Jeju Island and Cheonan have notified the KFA that they are willing to be host cities during the event.

“Because most of the necessary infrastructure, such as football stadiums, were already built before the 2002 World Cup, having a U-20 event won’t cost that much,” said Kim Jong, a spokesman of the Ministry of Culture, Sports and Tourism. “The KFA is working hard to generate profit with assets they already have.”