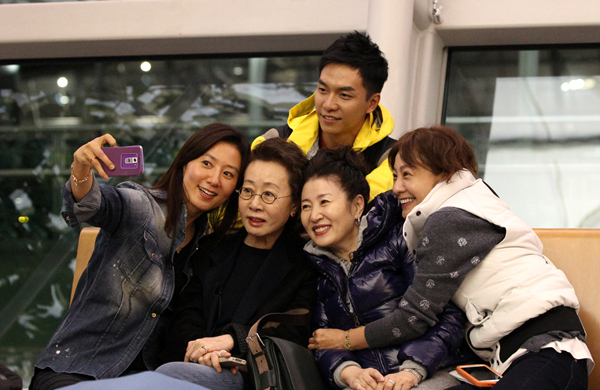 Left to right: Kim Hee-ae, Yoon Yeo-jeong, Kim Ja-ok and Lee Mi-yeon with Lee Seung-gi in back, take a quick photo of themselves prior to their departure for Croatia. Provided by tvN

Like the hit reality series “Grandpas Over Flowers” that it is modeled after, tvN’s “Sisters Over Flowers” sounds as if it will deliver some laughs: Four women, aged between 42 and 66, go on a backpacking trip around Croatia, together with a twenty-something Hallyu heartthrob.

But these four women are not your average housewives, wearing sun visors and sporting the mandatory perm that nearly all ajumma, or married women, seem to have. They are four of the biggest names in Korean entertainment: Yoon Yeo-jeong (66), Kim Ja-ok (62), Kim Hee-ae (46) and Lee Mi-yeon (42). Then there’s the star Lee Seung-gi (26).

Ahead of the first episode, which airs today, the program’s producer Na Young-suk, who also produced the hit variety show “1 Night, 2 Days” before creating “Grandpas Over Flowers,” spoke about what it was like filming his newest program and traveling around with four divas and their unlikely chaperone.

Q. Was it an obvious choice to call the show “Sisters Over Flowers”? 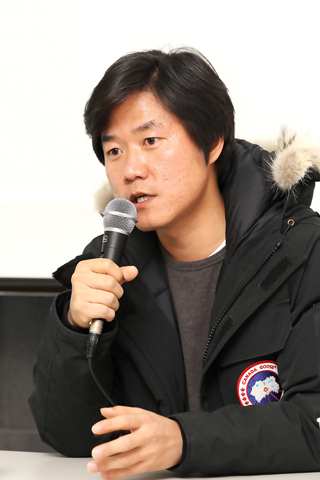 A. Actually we didn’t decide on a title at our first meeting. You could see in the teaser clip for the show that there was a scene where I was talking with the actresses and wasn’t sure what to call the older women. Because Mi-yeon is not much older than me, I called her nuna (“older sister”), but then I thought I should call Yoon Yeo-jeong “ma’am.” As you could see, she detested that, so we decided to call the female cast older sister. Although two of the women are as old as the cast of “Grandpas,” it didn’t feel right to call them grandmas. Women are sort of ageless in that way.

How was the experience of traveling and producing with women different from “Grandpas”?

First of all, grandpas don’t really care about hair dryers. I certainly don’t and neither does Lee Seung-gi. Filming with a female cast was difficult on a whole different level. Even things like sleeping in a new bed had an impact; they couldn’t sleep well and often had trouble going to the bathroom in new surroundings. The grandpas never had trouble using any toilet.

How did you decide on the cast?

As with the first show, in which we sat down with Lee Soon-jae and asked him for ideas, we talked to Yoon Yeo-jeong first. We asked her who she’d like to go traveling with. She actually said at first that she didn’t like traveling because she gets too tired and achy after a vacation. So we persuaded her step by step. We said to her, “You’ll be going abroad with these top actresses, don’t you think you will make some great memories?”

We also wanted to recruit a wide age range because we wanted actors with more than 15 years of experience and because they’d have felt the ebbs and flows of life and have more to talk about.

What was it like throwing Lee Seung-gi into the mix ?

We called Lee Seung-gi “Jimseung-gi” [a play on words suggesting both burden and beast] - and we meant it in both the beastly and burdensome sense, but more so the latter. Lee Seung-gi also made his debut at a young age [in high school] like the others, but while the actresses have some life experience, Lee Seung-gi really doesn’t. I wanted to portray Lee Seung-gi’s story, too, alongside the women’s. The way he loses it the first few days, and how he grows through the experiences after five or six days, I think is just as interesting as the tale of the sisters. To see him grow from being a burden on the others to something [better] was my other agenda.

Will fans be able to see the grandpas again anytime soon?

Initially, with season 1, we tackled the project as a backpacking series and we didn’t want to milk it for all it’s worth. We wanted to go at a natural pace.

We also told the grandpas that we wouldn’t pester them every year. But if their schedule permits later on, and if they were willing, we do want to do a follow-up at some point.

This is the second in the series, and next year we don’t know yet who will go backpacking.