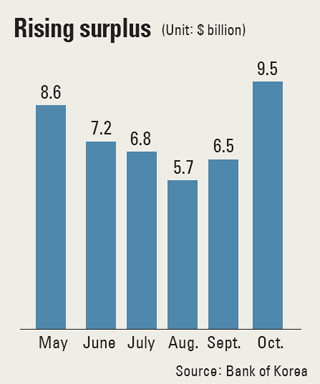 Korea’s current account surplus last month beat the previous record set in May largely thanks to a recovery in advanced economies that buy Korea’s exports.

According to the Bank of Korea yesterday, the current account surplus continued its 21-month streak last month and reached 9.5 billion won ($8.95 million), an all-time record.

The figure was not only a step up from the $6.5 billion reported in September, but even exceeded the previous $8.6 billion record set in May.

As a result, the accumulated current account surplus in the first 10 months of the year was $58.3 billion, much more than the $38.2 billion during the same period last year.

The accumulated surplus is now edging close to the central bank’s target of $63 billion for the year’s end.

“Favorable conditions in advanced economies contributed to an increase in exports while the stabilizing of raw material prices added to the good surplus,” said a Bank of Korea official.

The goods account was largely buoyed by brisk exports led by cars, smartphones and computer chips.

Exports in October increased 8.2 percent from the same month a year ago to $52.2 billion. Year-on-year growth of exports was faster than the 5.6 percent increase in imports to $45.2 billion.

Exports of petrochemical goods and display panels, on the other hand, saw a double-digit drop last month.

The faster growth in exports was largely attributed to a recovery in advanced economies.

Exports to the United States, which is Korea’s third-largest export market after China and Europe, were the largest contributor to last month’s overall export expansion.

They grew 23 percent year-on-year, a turnaround from a 1.6 percent dip recorded in September.

Exports to China grew from 5.5 percent in October compared to 1.4 percent in September.

Exports to China last month amounted to $13.2 billion, bringing the total for the first 10 months to nearly $200 billion.

Although Korean products continue to thrive in the global market, there are growing concerns over the appreciation of the won, which has been trading between 1,050 won and 1,060 won against the greenback.

In fact, a recent central bank business survey showed that the appreciation of the Korean won has been weighing heavily on exporters.

Some brokerage firms such as KTB Investment and Securities project the Korean won will be traded between 1,090 won and as high as 1,030 won.