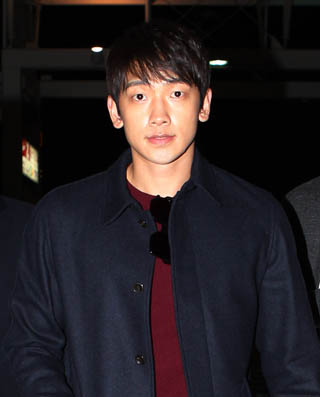 The entertainer Jung Ji-hoon, better known as Rain, is once again under investigation because of accusations he violated military rules while he was serving as an entertainment soldier.

The Supreme Prosecutors’ Office said yesterday that someone filed an official complaint against the singer, accusing Rain for taking too many days off and breaking other regulations during his enlistment, which lasted from October 2011 to July 2013.

The prosecutors’ office has started to review the complaint to see whether the accusation is worth pursing and whether it should summon Rain for questioning.

In January, the singer was found to have met with his girlfriend, actress Kim Tae-hee, too often and given a seven-day probation.

When Rain was discharged from the military in July, the Ministry of National Defense investigated a series of accusations against Rain and other entertainment unit soldiers, but found the singer not guilty of any violations. While Rain was discharged without punishment, other entertainment soldiers, including singer Se7en and Sangchu, were ordered to serve some jail time.

Rain’s agency has reportedly said that it has not been contacted by prosecutors yet.
By Lee Sun-min