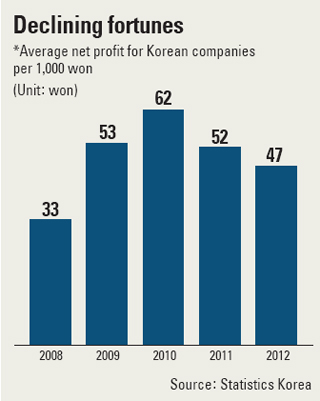 Declining profit margins for corporate Korea, a phenomenon first observed among large conglomerates, has spread to local companies in general, according to Statistics Korea.

Data released by the state statistical agency yesterday showed that the average net profit of Korean companies has continued to drop since 2010.

Statistics Korea surveyed 12,010 Korean companies that have 50 or more employees and at least 300 million won in capital. According to the survey, the average profit those companies made from selling 1,000 won ($0.94) worth of goods or services last year was 47 won before corporate tax. The same figure was 62 won in 2010 and 52 won in 2009.

Chaebul.com, a conglomerate-tracking agency, announced the result of research earlier this month saying the average profit margin of the country’s top 20 conglomerates was 56 won on every 1,000 won of revenue last year, down from 78 won in 2010. The profitability of 16 of the top 20 conglomerates dipped to levels below those recorded during the global financial crisis following 2008, it said.

“The global economy is in such a dire condition that many Korean exporters are having trouble,” said an official of the Federation of Korean Industries, the country’s biggest business lobbyist group. “Domestic demand continues to sag due to factors weighing in on domestic consumption such as high levels of household debt.”

By individual country, 35.8 percent of those companies, or 2,576 companies, had an affiliate in China. The United States and Vietnam followed at 13.2 percent and 6.4 percent, respectively.