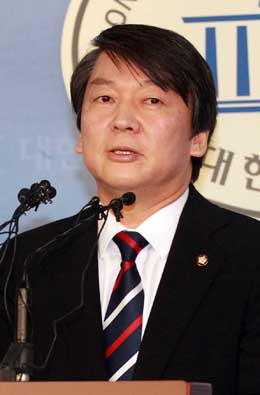 Independent lawmaker and failed presidential candidate Ahn Cheol-soo confirmed yesterday that he would start his own political party to pioneer a new form of politics for Korea.

But he was ambiguous on details such as when, who would join and whether he would contest many races in the general election next June.

Excoriating the confrontational and polarized politics of the day, Ahn said at a press conference that he was relying on voters sick and tired of the political status quo.

“Now I officially begin to consolidate my support with people who share my goals by launching a so-called Committee for Striving for New Politics along with the People,” he said. “I reached the conclusion that we can’t make anything in an old pot and it’s time for new political forces to come forward.”

Mentioning a series of current affairs, Ahn said politicians are just keeping their political fights going, while he will be the one who thinks about the people first and take the “politics for people’s livelihoods” as his priority.

When asked what the “consolidating his support” means, Ahn told reporters, “Of course, the ultimate goal is creating a political party.”

Ahn said the newly launched committee will decide everything about his coming political actions, including how to form the new party.

On the issue of whether he would field candidates in the June general election, Ahn said, “The committee will form a road map about our upcoming schedules. Still, about the general election, I tell you only this point, that we will do our best to responsibly participate in the election.”

Reporters barraged Ahn with questions on his party: whether members would defect from the troubled main opposition Democratic Party, and whether he is having difficulties recruiting members. Ahn and his aides kept mum on the sensitive issues. They said they may hold another press meeting next week.

A string of the ruling Saenuri Party leaders poured scorn on Ahn, saying he was still testing the waters.

“Representative Ahn has never shown his own vision, philosophy, new policies, and he keeps his ambiguity while maintaining his alliance with the opposition,” Saenuri floor leader Choi Kyung-hwan said at a party meeting yesterday. “We ask him to stop the politics of testing the waters and try to make up his mind about public opinion.”

Meanwhile, the defeated presidential candidate from last December, the Democratic Party’s Moon Jae-in, is also re-emerging in the political arena. Since his defeat last year, Moon has maintained a low-key public profile.

On the same day of Ahn’s press meeting, Moon ratcheted up his criticism of President Park Geun-hye’s administration yesterday, saying he felt “outraged” about the administration and the ruling party.

Moon, a Catholic, mentioned the prosecution’s probe of a leftist priest who publicly condemned President Park and seemed to defend North Korea’s shelling of Yeonpyeong Island in 2010.

Moon said the president and the ruling party “are focusing too much on a crackdown on pro-North Korea people.” “I think [the prosecution’s probe into the priest] would become cause an uproar by Catholic believers in the world,” Moon said. “I think the probe into the priest is humiliating.”

Moon is also preparing to publish a book titled, “Memoirs of the Presidential Race.”

“Publishing a book is a meaningful step for Moon to return to the political arena,” an aide to Moon told the JoongAng Ilbo. “The clock for the next presidential race has already started ticking,” the aide said. “Ahn’s side is acting faster than our expectation.”

Ahn is still receiving better approval ratings than that of the DP, according to a poll by the Korea Society Opinion Institute.

In a poll on Nov. 23 that surveyed 700 adults, Ahn had a 27.3 percent approval rating against the DP’s 12.1 percent, which both followed the Saenuri’s 37.9 percent. About half of his supporters told the pollsters that Ahn should create his own party and not join the DP. Rumors spread that Lee Kye-ahn, a former DP lawmaker who quit the party on Tuesday, would likely join Ahn.

Still, no political bigwigs have announced their defections to Ahn.