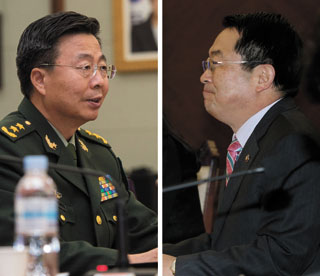 China flatly rejected Korea’s request to adjust its newly expanded air defense identification zone in the East China Sea, putting a damper on diplomatic ties that had never been closer and bringing more tension to the Northeast Asia region.

At the third annual Korea-China strategic defense dialogue yesterday, Baek Seung-joo, vice minister of national defense, told his counterpart Wang Guanzhong, deputy chief of general staff of the Chinese People’s Liberation Army (PLA), that it was highly regrettable that China did not tell Korea before unilaterally proclaiming Saturday a newly expanded air defense identification zone. The zone includes Ieodo, which refers to a group of underwater reefs located 149 kilometers (92 miles) southwest of Korea’s southernmost Mara Island in the East China Sea. Seoul and Beijing both claim sovereignty over the waters of Ieodo.

Korea also made clear its jurisdiction over the waters around Ieodo won’t be affected by air defense identification zones of neighboring countries, and that Korea is also considering expanding its own air defense zone to safeguard “our national interests,” said Kim Min-seok, a Defense Ministry spokesman, in a briefing after the dialogue.

“China decided not to accept the demand,” he said.

Korea’s failure to reach an amicable settlement with China over the air defense identification zone came after the United States, Korea’s closest ally, took a more aggressive response by flying two nuclear-capable B-52 bombers through the zone overnight Monday.

Should Korea expand its own air defense identification zone, it may lead to similar challenges by Chinese or Japanese planes, or to Japan or China announcing further expansion of their zones.

Air defense identification zones are unilaterally set by countries and are larger than traditional national air spaces. China’s newly proclaimed zone overlaps Korea’s and Japan’s at points where the countries have disputes over claims, such as Ieodo.

Meanwhile, U.S. Vice President Joe Biden will use meetings with leaders in Beijing next week partly to express U.S. concern about China’s behavior toward its neighbors and seek an explanation of the air zone, according to a Washington official who briefed reporters Wednesday.

China’s establishment of the zone “is a potentially destabilizing unilateral action designed to change the status quo in the region, and raises the risk of misunderstanding and miscalculation,” U.S. Defense Secretary Chuck Hagel said in a call Wednesday to Japanese Defense Minister Itsunori Onodera, according to an e-mailed statement by Pentagon spokesman Carl Woog.

If Korea opts to join hands with the United States and Japan, it could lose its warm relationship with China, eventually leading to a Korea-U.S.-Japan versus China kind of cold war.