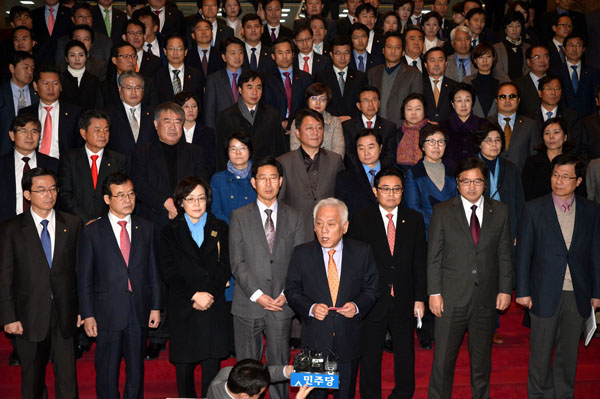 Lawmakers of the opposition Democratic Party announce yesterday that they will boycott all business at the National Assembly after the ruling Saenuri Party alone passed a motion appointing Hwang Chan-hyon head of the Board of Audit and Inspection while DP lawmakers refused to participate in the vote. [NEWSIS]

The National Assembly yesterday passed a motion for appointing Hwang Chan-hyon head of the Board of Audit and Inspection despite a boycott from the opposition Democratic Party.

The Democrats then said they would boycott all upcoming business at the National Assembly.

The motion passed the plenary session after 154 lawmakers voted for it, whereas three voters opposed and two abstained. Assembly Speaker Kang Chang-hee tabled the motion saying, “It is no longer right to postpone passage of the appointment motion.”

He added that he asked the ruling and opposition parties to reach an agreement since Nov. 15 and a 94-day leadership vacuum at the Board of Audit and Inspection has caused troubles in state affairs.

Earlier in the day, the ruling Saenuri Party unilaterally adopted a report on the proceedings of Hwang’s confirmation hearing, a prerequisite for sending the appointment motion to the plenary session.

The adoption was made possible because seven out of 13 members of the National Assembly Special Committee on Personnel Hearings are from the Saenuri Party.

All 127 Democratic Party lawmakers attempted to proceed with a filibuster, submitting a document to Speaker Kang demanding that each lawmaker be allowed to talk about the personnel hearing for as long as they wanted.

Kang rejected the request, citing the Assembly convention of not accepting such demands in regard to official appointments. The Democrats staged a boycott and only the Saenuri and independent lawmakers participated in the vote.

“No obvious violation of law or corruption has been found concerning nominee Hwang except for a resident registration law violation, which has no relevance to allegations that he speculated in real estate,” said Representative Seo Byung-soo, head of the Special Committee on Personnel Hearings and Saenuri lawmaker. “No problem has surfaced about his morals and integrity.”

The Democratic Party has been opposing Hwang largely because the 60-year-old nominee is from the Yeongnam region, which covers the Gyeongsang area, claiming the administration is partial in geographical distribution of appointments.

The Democrats protested the vote’s result. Park Soo-hyun, the DP’s floor spokesman, dubbed the passage of the motion “a brutality perpetuated by the speaker and the Saenuri that will remain in history as a disgrace for the National Assembly.” He added, “It is extremely regrettable this happened only a few days after President Park Geun-hye said in a policy speech here she would respect whatever issue both parties agree on.”

The party later said it is considering taking legal action against Kang, arguing he infringed upon the voting rights of a large number of lawmakers. The ruling party contended the process was regular and legal.

The appointment of Hwang has paved the way for the president to proceed with appointments of candidates for two key posts - health minister nominee Moon Hyung-pyo and prosecutor-general nominee Kim Jin-tae. The Blue House refused to provide any information about the schedule.

In October, Park named Hwang, former chief of the Seoul Central District Court, to succeed Yang Kun. Yang, who resigned in August when he still had 19 months left of his tenure.

His resignation followed a public backlash against the board’s audit of the controversial four-rivers restoration project.