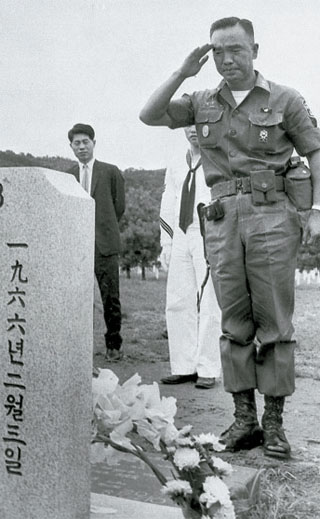 The late Lt. Gen. Chae Myung-shin, who served as the first commander of South Korean forces during the Vietnam War, was buried yesterday at Seoul National Cemetery alongside soldiers who fought in the conflict.

Lieutenant General Chae, who also fought in the 1950-53 Korean War, died on Monday of natural causes. He was 86.

The Army hosted Chae’s funeral at the cemetery, which is reserved for Korean veterans. The late general was initially going to be buried in a special section in the Daejeon National Cemetery, constructed for high-ranking officers and senior commanders. However, the military granted his request to be buried alongside rank and file soldiers with whom he served in Vietnam. The military also respected Chae’s wish for a burial plot identical to that of other soldiers laid to rest there, even though gravesites for commanders are typically more elaborate. Chae is the first general to be buriedat the graveyard for rank and file soldiers in the Seoul National Cemetery.

“I have deep respect for General Chae, the everlasting soldier and commander,” General Kwon Oh-sung, Army chief of staff, said yesterday at the funeral. “He was the bulwark of our country and a true soldier who walked an upright path during a chaotic time.”

Chae Myung-shin was born in 1926, in Goksan, Hwanghae Province, in present-day North Korea. Shortly after Korea’s liberation from Japanese colonial rule, Chae worked briefly as an elementary school teacher in Jinnampo, South Pyongan Province. In past interviews, Chae often spoke of the moment he denounced communism.

While working as a teacher, he met a Soviet captain. Over drinks, the man told him that, contrary to doctrine, the Communist Party upheld stark class divisions. After the conversation, Chae noticed that different meals were served to different ranks within the Soviet unit stationed there. This idea stayed with him, he acknowledged, and forced him to seriously reconsider what he believed about communist ideology.

On Feb. 8, 1946, Chae met Kim Il Sung, North Korea’s founder, at the opening ceremony of the Pyongyang Institute, a military and political academy. Kim proposed that he and Chae work together, though Chae managed to decline his offer. He came to South Korea in 1947 and graduated from the South Joseon Defense Academy, the predecessor of the Korea Military Academy, in 1949. After the Korean War broke out in 1950, he fought as a second lieutenant for the South.

During the war, he quickly distinguished himself as a hero. He successfully commanded the Skeleton Corps, the country’s first guerrilla unit, and became an authority on guerrilla strategy and tactics. During one battle, he succeeded in capturing guerrilla commander Kil Won-pal, his North Korean counterpart.

In 1953, Chae graduated from the U.S. Army Infantry School and supported Park Chung Hee’s military coup on May 16, 1961.

As the commander of the 5th Infantry Division, he managed to send a regiment to Seoul, leading Park to victory. But although he was one of five key members of the coup, Chae walked a markedly different path than Park.

He was particularly critical of Park’s constitutional amendment in October 1972, which extended his rule almost indefinitely under the authoritarian Yushin system. Because of his direct criticism of the president, he was never promoted to general.

But while he eschewed a career in politics, Chae’s distinguished himself as an impressive military strategist with great tactical prowess when he led South Korean troops deployed to Vietnam. Despite the fact that Chae openly protested Korea’s participation in the conflict, President Park appointed him as the first commander to head the deployment. From 1965 to 1969, he led South Korean forces on the frontlines in Vietnam.

Although the U.S. military was initially skeptical of South Korea’s ability to command and control its own operations, Chae won them over, presenting his tactics and gaining operational authority.

After being discharged from active duty, he served as Korea’s ambassador to Sweden, Greece and Brazil. Chae is survived by his wife, one son and two daughters.