Production, spending, investment all on rise

Production, spending, investment all on rise 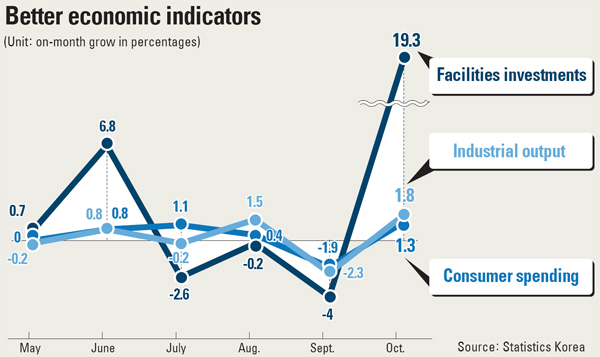 Once again, economic indicators are showing that Korea’s economic recovery is on a solid track.

Last month, industrial output, which includes the service industry, saw its largest on-month increase in 11 months - largely on the back of improvements in manufacturing industries, where production has increased.

Other indicators, including consumer spending and investment also rose - especially investment by companies on facilities including production lines, machinery and logistics - which had the largest monthly increase since 1996.

According to Statistics Korea yesterday, Korea’s industrial output in October increased 1.8 percent compared to September. The last time it grew at such a rate was nearly a year ago, when it rose 2.1 percent in November.

Industrial output in the first three months of this year struggled and actually recorded an on-month decline. Although there were hopes of an economic recovery, the industrial output on-month growth in September fell 2.3 percent after union workers at Hyundai Motor went on strike.

The Statistics Korea report came a day after the Bank of Korea announced that the nation’s current account surplus record was topped and reached $9.5 billion, largely thanks to growing demand in advanced economies, including the United States and Europe.

Even when compared to a year ago, industrial output saw a 3 percent increase, which is a turnaround from the 3.9 percent decline posted in September. In fact, manufacturing led the overall industrial output as it grew 2 percent.

The manufacturing growth was largely led by automakers, whose production expanded 17 percent on-month as a strike ended and overseas demand rose. The manufacturing of telecommunication devices also grew, posting a 7.5 percent increase on-month.

Meanwhile, consumer spending went up 1.3 percent last month, a turnaround from a 1.9 percent drop in September. The monthly increase was the sharpest in more than a year. The last time consumer spending reported such a surge was in July 2012, when it grew 2.3 percent over that of June.

But this month, companies’ investments in production plants, logistics and so forth stood out the most. Facilities investment grew 19 percent on-month.

“Investment in the electric and electronics industries fell, but investment in automotive and logistics as well as machinery grew,” said an official at the statistics office.