It’s beginning to look a lot like ... that time of year

It’s beginning to look a lot like ... that time of year 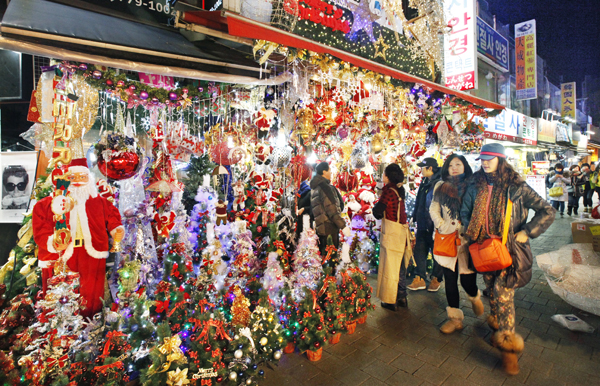 Daedo Market in Namdaemun offers an alternative to Christmas-tree shopping. It’s an East-meets-West sort of atmosphere, with Christmas decorations being sold next to Korean souvenirs. By Park Sang-moon

With Christmas just a few weeks away, it seems everyone is getting in the festive spirit.

Carols are playing, shop windows are fitted in Christmas merchandise and sales are going on around the city. As with many things in life, half the fun of the holiday lies in decking the halls with all things Christmas.

While department stores and megastores have aisles dedicated to trees adorned in red, white and gold trimmings, it’s just not the same as browsing for an hour or two and picking up craftwork that catches your eyes. Shopping for a Christmas tree and decorations has an almost therapeutic element as it’s easy to get in the holiday spirit just by walking around.

’Tis the season to hit the stores. 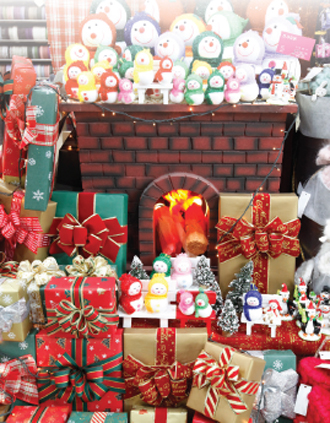 Not only can you pick up knitwear or a scarf for 10,000 won ($9.45), but you can find a wide array of pretty things at the Express Bus Terminal Station’s underground arcade.

GoTo Mall, or the former Gangnam Underground Shopping Arcade, is the perfect go-to mall, especially in the blistering cold. It’s a one-stop destination where you can while away the hours eye-shopping or picking up a few items for the home or office.

Concentrated at the east wing of the sprawled-out strip of shops, it’s hard to make out where one store ends and another begins. With so much glitter and colors to behold, it’s hard to notice the difference from one merchant to the next. But if you take the time to walk the whole stretch starting from store D117, you’ll get a clear idea that each store has its own theme.

A walk down the aisle later, it’ll become obvious that this year is all about pastels, teddy bears and wool - a combination akin to a baby’s nursery. Of course, there are classics that stand the test of time, too.

“Traditional red and white decorations on trees are still a firm favorite,” said a shopkeeper at “Sooyoung” - one of the stores selling trees with traditional and pastel decorations.

Most of the already-decorated trees come in simple motifs to keep the cost down, and depending on the size, prices start from 20,000 won. You can also pick up just the tree and do the decorating yourself.

There are gold and silver wire trees, too, for those who like simplicity, also in different sizes. For those who want to inject some nature into their decorations, there are poinsettias - with glitter, of course - reduced in price from 20,000 won to 15,000 won or 18,000 won.

From ribbons, balls, teddy bears and both woolen and wooden ornaments, most items on sale have a more “cutesy” feel and a lot of the ornaments could be kept on the mantelpiece all year.

For those who want something different, though, there are also artsy options like string lights with wicker balls from 3,000 won.

Nothing feels more like Christmas than an evening stroll through the market in the crisp winter air.

Watching the lights change colors against the backdrop of giant Santas, Rudolphs, snowmen, Christmas ornaments and people, you are also able to gauge how these decorations will look at home. Two markets known for their festive cheer are Daedo Market in Namdaemun and the European Market taking place today in Seongbuk District.

With an emphasis on bigger trees and bigger ornaments, Daedo Market in Namdaemun offers an outdoor alternative to Christmas-tree shopping. Those who don’t like underground spaces would undoubtedly find Daedo a more likeable place than GoTo Mall.

Placed in the heart of Namdaemun market, you can also indulge in a hotteok (a Korean pancake with filling) or two as you browse the shops.

The Christmas shops in Namdaemun are bigger and less crowded than those in GoTo Mall. It’s also an ideal place to go if you want generic items like stockings, classic wreaths and art supplies to make your own cards and gift wrap. Rather than cutesy pieces, you will find a wide array of decorations in familiar Christmas themes. There are also life-size Santa dolls, snowmen and larger ornaments. It’s an East-meets-West sort of atmosphere with the Western Christmas decorations being sold next to Korean souvenirs. There are more tourists here than at the GoTo Mall. The best time to go is in the late afternoon.

If Europe is too far to travel for your Christmas wares, then make sure you get down to the European Christmas Market today from noon to 8 p.m. at the Seongbukcheon Fountain Square. Hosted by Seongbuk Global Village Center, the marketplace will showcase food and craft from the Czech Republic, Finland, France, Germany, Italy, Romania, Switzerland, Britain and the Ukraine.

In addition to delicious Christmas morsels from Europe, there will also be European ornaments for the tree, swags for the door, bells and all sorts of tree ornaments as well as candles, photo frames and other trinkets that make perfect gifts.

Traditional German Nutcracker figurines are sold here and the whole market brings a little taste of Europe. If GoTo Mall entices with an overload of sweet and cute ornaments, then the Seongbuk European Market will tantalize with a taste of authentic European decorations where you can find Lebkuchen, heart-shaped gingerbread cookies that double as decorations.

There are also performances taking place throughout the day, the highlight being a competition for the best Santa outfit. Anyone can participate, so long as they come dressed as the famous gift-bearer. Participants are encouraged to arrive earlier to register. The judging will take place at 2 p.m. After the costume display, a dance contest is set to take place at 2.30 p.m., followed by band performances.

There is also an auction set to take place for a ginger bread house from the Grand Hilton. Last year, the prized item sold for 55,000 won and no doubt was the perfect dinner table centerpiece. In its fourth year, the festival aims to increase awareness of European Christmas culture as well as provide some relief for Europeans living in Korea.