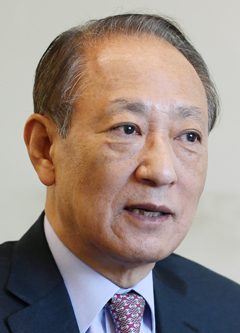 Former financial group chiefs that were appointed during the Lee Myung-bak administration are coming under investigation by the current government, since having been pushed out of office over the past months.

Under President Park Geun-hye, the Financial Supervisory Service, the nation’s top financial regulator, has reportedly found a variety of irregularities and financial wrongdoings.

The JoongAng report stated that, based on the latest interim results of the regulator’s comprehensive inspection into Hana Financial Group, the FSS found that former Chairman Kim received excessively high pay as the group’s adviser, a post he gained upon leaving.

The financial regulator is known to have requested Hana Financial Group to submit details of the total amount it pays its advisers, including Kim.

The financial group’s numbers show Kim’s annual pay was around 400 million won ($378,000). He has been serving as an adviser since March of last year, when he retired as chairman without serving another term.

The FSS is also reportedly looking into expenses the financial group paid for Kim when he went on overseas business trips to countries like the United States, China and Indonesia.

There is growing speculation that he included personal matters while on official trips.

“We found that [Kim] claimed a minimum of 5 million won and as much as 15 million won on just basic expenses like airfare and accommodation charges per trip,” an FSS official was quoted as saying in the report. “The total business trip expenses would have been much higher, including meal fees.”

The official said, among Kim’s other large expenses, Kim spent around 5 million won at a wine shop.

The FSS, meanwhile, has advised financial groups to pay only what is required for advisers and outside directors.

Also, it advised the groups to decide whether advisers should be extended after evaluating their contributions.

“Over the period of a year and eight months, Hana Financial Group hasn’t once evaluated Kim’s performance,” said an official from the FSS.

Meanwhile, the regulator declined to officially confirm speculation surrounding Kim, saying that “the comprehensive inspection into the financial group is currently under way” and that “confirmation will be made after final results are out.”

Along with Kim, former KB Financial Group Chairman Euh Yoon-dae has also been identified as someone on the FSS’s watch list.

Last week, various irregularities were allegedly identified at KB Kookmin Bank, including the embezzlement of more than 9 billion won in housing bonds by employees. It has also been reported that the bank’s Tokyo branch created a 2 billion won slush fund by giving out illegal loans to financial consumers, including Korean companies operating in Japan. The incidents all happened during Euh’s term.

On Wednesday, KB Kookmin Bank President Lee Kun-ho apologized, saying that he would take responsibility for the numerous incidents.

Amid growing speculation involving KB Kookmin Bank, the Financial Consumer Agency yesterday said it will ask the FSS to investigate KB Kookmin Bank after accepting complaints from customers that could have been caused by the alleged irregularities.