With public concern growing over massive debts at the nation’s state-run institutions, the Korea Electric Power Corporation (Kepco) became the first to announce a massive overhaul aimed at getting the company’s liabilities under control.

In a statement released yesterday, Kepco said 20 percent of its 39 departments in the company’s headquarters would be abolished. As a result, 8 percent of workers in the headquarters, or 120 people, will be relocated to other areas where electrical facilities are built.

The power company also said a special department devoted to reducing its debt would be created.

Those moves come on top of plans laid out earlier in the month to reduce the company’s debt by selling property sales and reducing paychecks.

Nonunion employees will see cuts to their year-end bonuses of 10 percent to 30 percent, while next year’s bonuses will be cut in half.

Furthermore the monthly paycheck for CEO Cho Hwan-eik will be cut 36.1 percent starting next year, while other high-ranking executives will see their salaries reduced 28 percent.

The power company will also sell large amounts of its stock holdings in its affiliates, including Kepco E&C, as well as LG U+. 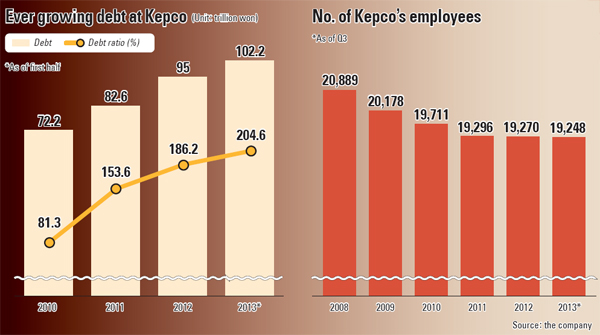 Among the properties to be sold off, Kepco said it plans to get rid of land at its headquarters and offices in Gangnam District, southern Seoul.

Those moves are expected to save up to 6.8 trillion won ($6.4 billion) and reduce the company’s debt ratio by about 15 percentage points.

Kepco has seen its debt soar in recent years, as the previous administration under Lee Min-bak refused to let the company increase its power bills, even as Kepco’s costs rose because of climbing oil prices.

At the halfway point of this year, Kepco’s debts reached 102 trillion won, up from 95 trillion won at the end of last year. The debt ratio of the power company now stands more than 204 percent. The last time it was below 100 percent was in 2010.

Kepco, like the state-run Land and Housing Corporation, has become a symbol for mismanagement, with debts bloating, the company avoiding crucial restructuring, and employees enjoying high wages, bonuses and job security.

Park’s economic general, Hyun Oh-seok, the deputy prime minister and finance minister, on Nov. 14 ordered the heads of 12 public companies, including Kepco, to make massive changes, telling them “the party is over.”

But a recent government decision to allow Kepco to raise energy bills an average of 5.4 percent should help the company improve its books. The government will also tax bituminous coal used in power plants while lowering the tax rate on liquefied natural gas and kerosene prices so people can change to nonelectric heating sources.

Such measures have been viewed positively for the power company.

“Kepco’s operating margins and cash flows will improve over the next 12 to 18 months because of the rate hike, which occurs against the backdrop of lower costs for fuel imports,” said Mic Kang, a Moody’s vice president and senior analyst, in a report.

Moody’s projected that the hike of electricity bills will allow the power company to reduce its reliance on debt funding.

Daishin Securities expects Kepco to have a 6.3 trillion won operating profit next year, which would be more than 260 percent higher than this year’s. Net profit is expected shoot up to 3.4 trillion won by the end of 2014.

The power company’s stock fell 1 percent despite the announcement to close at 32,000 won on the Seoul main bourse.