The macho side of the adorable Mini brand

The macho side of the adorable Mini brand 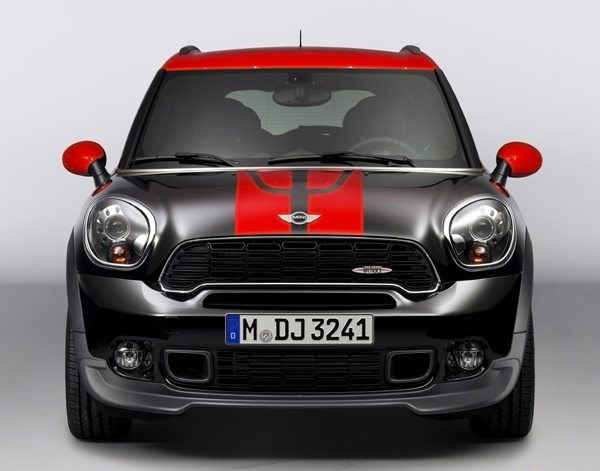 As its name suggests, the Mini is an auto brand that offers cars that are small, cute but also fancy. It’s no secret that many young Korean girls want to buy a Mini because its brand identity suits their style to a T.

But most of them are probably thinking of the Mini Cooper. If they saw the Mini Countryman, their impression would be quite different.

And if they drove it, they’d have a whole new idea of Minis.

The Countryman is a first for Mini in many ways. It’s its first model to offer four-wheel drive and the first model to come with four doors. It’s also the first that could be called an SUV, although Mini calls it as “sport activity vehicle” or SAV.

Who needs utility when you can offer activity?

So generally, when people first see the Mini Countryman, they will know it’s a Mini, but they will realize right away that this is a big Mini. The Countryman is the largest Mini model out there. It’s about 0.4 meters (1.3 feet) longer and 0.1 meter wider than the regular Mini Cooper.

It not only provides more roomy rear seats than any other Mini, but the storage capacity is 350 liters (92 gallons) and can be enlarged to 1,170 liters if you fold down the back seats.

Because of its size, some Mini fans say the Countryman is too fat to maintain the brand’s cuteness. But the Countryman has maintained the typical Mini style, featuring windows extending around the entire car, voluminous wheel arches and vertical rear light clusters.

The Countryman comes in six models in Korea and among them, the John Cooper Works (JCW), which I test drove, is the most robust. The JCW refers to the Mini’s in-house performance arm and is named after John Cooper, the legendary British builder of race cars. 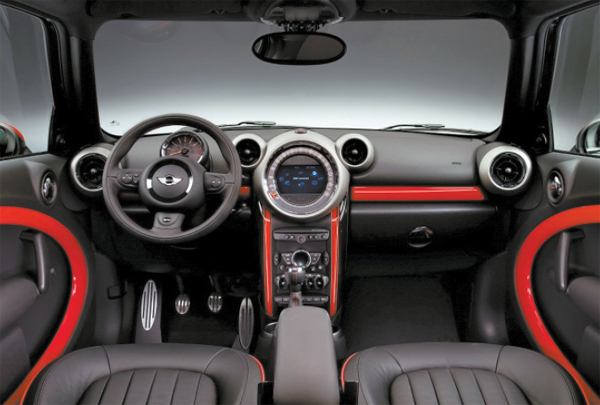 Interior of BMW’s Mini JCW Countryman Provided by the company

The JCW Countryman is easily recognized even before you see the JCW badges on the radiator grille and tailgate.

The JCW usually has a red sport stripes which you can see on the hood and lower side of the body. The red stripes best complement a black car, but customers can choose from a selection of seven exterior shades, according to the automaker. The contrast finish for the roof and exterior mirror can be also ordered in red, as well as white and black. So as the company says, just make your own style of Mini.

Inside the car, red contrast stitching on black cloth or leather again creates harmony and signals the JCW model. The stitching adds flash to the interior, which is typically Mini, with circular designs predominant from the air vents to audio speakers.

But what’s different from a typical Mini Cooper is that the window controls have been moved from the center console to the door panels, allowing an easier way to open and close the windows.

What I like about Mini designs in general is the use of toggles instead of push buttons or knobs that you see in most cars. Toggle switches give a kind of analogue feel and you fancy yourself a pilot, especially when you open the sun roof.

Then there is Mini’s famous speedometer located in the center of the front panel, which looks like Mickey Mouse’s head with air vents as ears. For those who don’t know, drivers don’t need to read the speed through the center speedometer because thankfully, Mini put a digital display of the car speed on the bottom of the rpm gauge behind the steering wheel.

While the design of the Mini JCW Countryman shares elements with the typical Mini car, performance wise, it’s a different animal altogether. The JCW Countryman embraces its motorsport heritage, which has been conquering the World Rally Championship and also run at the Dakar Rally.

The other Countryman sold in Korea is equipped with 2.0-liter diesel engine, but for the JCW version, it has 1.6 liter 4-cylinder Twin Turbocharged gasoline engine that currently offers 218 horsepower, best among any Mini model. 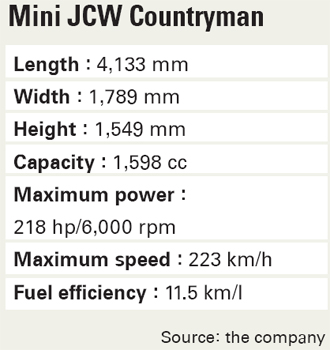 Routing the power to the road is a six-speed automatic gearbox, but it’s better to switch into manual mode via paddle shifter behind the steering wheel and toggle on the Sports mode to get quick acceleration.

The JCW Countryman will also handle corners like a sports car with its standard sport suspension with stiffer springs and a lower ride height. While driving, you will feel the surface of the road, which tells you this car isn’t built for comfort but for true dynamic and fun driving.

In addition, the JCW Countryman also comes with a standard four-wheel drive system, so there’s no need to worry about snow or mud, which is what many people consider the Mini’s weak point.

The fuel efficiency is not that great compared to other Minis, but this is acceptable because the JCW is a performance-aimed car. However, probably the weakest point of this car is its price tag of 61.1 million won ($58,100), which is enough to buy luxury German midsize sedans.

Mini has been giving credit to itself as a brand that constantly challenges the norm, and with the JCW Countryman, it is trying to mix together various characteristics.

There is the aspect of sportiness and four-wheel drive, which makes you feel the car would be capable of off-road driving. There’s also the fun inherent in the Mini brand, which you feel from the style and design. It’s a fine combination.