Comedian looks back on an entertaining life

Comedian looks back on an entertaining life 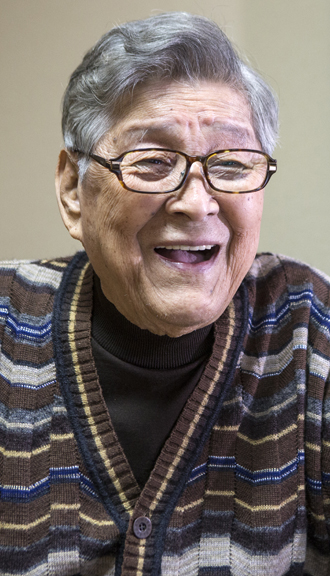 Koo Bong-suh, who recently received the Eun-gwan Order of Cultural Merit award, talks about his lifelong career as a comedian. By Cho Yong-cheol

Koo Bong-suh, the legendary Korean comedian, was watching a foreign film when I visited him.

“I would rather watch foreign films because I got tired of all the news on TV. I only watch action films because I’m too old for romances,” he said, sitting back in his leather sofa.

Before the interview, he combed back his silver hair. His wife asked me to speak loud and clear while he was putting in his hearing aid. The interview began before she served the ginger tea she had prepared.

Koo, who turned 88 this year, minded and treated me with respect, even though I was young enough to be his granddaughter.

It was a busy month with lots of people visiting.

Early in October, the retrospective exhibition “Koo Bong-suh’s 60 years of life as a comedian” was held in the Seoul Jung District Cultural Center, followed by a tribute performance from junior comedians. Also, he recently received the Eun-gwan Order of Cultural Merit award during the “2013 Korean Popular Culture and Art Awards.”

The extra activities have brought him more visitors.

“I was busy with all the visitors. I guess they are trying to keep records before I die,” he said. When asked about his daily routine, he said he has a simple and well-regulated life.

“I wake up and brush my teeth and face, eat and sit down. I don’t usually go for walks because my legs hurt. When I’m forced to, I try to stroll a short distance,” he said.

He still reads, because he dreamt of owning a secondhand bookstore when he was young. But now, he only reads novels because he finds other genres boring. He also said it is good to do something fun because it’s better for the mind.

“I used to read literature, but I don’t need them now. When someone’s old, the best thing is to have fun, above all,” he said.

Born in an affluent home, he was able to order milk and learned how to play the organ and accordion. In 1945, the year that Korean was liberated from Japan, he joined a musical troupe by promising his father that he would only do it for four days. He may have started as a musician, but his world broadened into comedy and acting.

Now, he is known as a legendary comedian, but he was actually a multi-entertainer who enjoyed immense popularity in every field, including on TV, movies and radio. He was also a producer who wrote scripts and hired many comedians.

All of his stories converged on comedy, but he loved writing scripts the most. His stories would wander into comedic themes and he had difficulty finishing scripts. For this reason, some writers wouldn’t even bring him their manuscripts. This happened when he performed as a team “flyboy” with Kwak Gyu-seok, another legendary comedian.

Koo, who starred in more than 400 films, had a lot of praise for director Shin Sang-ok.

“Director Shin Sang-ok is the one person who recognized comedy, but he wouldn’t direct comedies. I urged him to, but he refused because comedians are so much better at making people laugh,” he said.

Many of his comedian colleagues, including his best friend and teammate Kwak, have died. Now, Koo and Song Hae are the only two people left from the first generation of comedians who encourage younger comedians.

He seldom watches current programs on TV and wants the younger comedians to do something that can be enjoyed by people of all ages. But, he added, he shouldn’t tell them what to do.

“People don’t laugh when they see me because the world has changed,” he said when asked if he wanted to go up onstage again and hear people laugh.

“To make somebody laugh, one needs the ability to react instantly. And that has rusted because I got old.

“Even the lion, the king of beasts, gets old. And so did I,” said Koo, laughing.