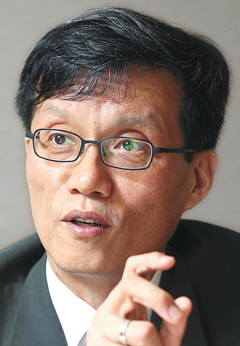 Rhee Chang-yong, 55, the former vice chairman of the Financial Services Commission (FSC) and chief economist of the Asian Development Bank (ADB), was tapped as the new director of the Asia-Pacific Department of the International Monetary Fund (IMF).

Rhee will begin his new role in February, taking over for Anoop Singh, the existing director, who announced his retirement.

It is the first time that a Korean was named director, the highest position except for the chief and the four vice chiefs at the IMF.

The same position was formerly occupied by Hubert Neiss, who was responsible for restructuring the Korean economy during the 1997 financial crisis.

The IMF, which has 188 member countries, is headquartered in Washington, D.C., and there is one chief, four vice chiefs, two advisers and 20 directors.

There is also an executive board, responsible for conducting the day-to-day business of the IMF, which consists of directors from more than 20 countries, including Yoon Jong-won, an executive director from Korea.

“The IMF’s directorship of a department is usually taken by ministers or vice ministers from each country,” said Yoon. “Although the work period is three years, it may be extended.”

Rhee, who is from Nonsan, South Chungcheong, has a bachelor’s degree in economics from Seoul National University and received his Ph.D. in economics at Harvard University in 1989.

Rhee’s mentor while studying at Harvard was Lawrence Summers, who served as the director of the National Economic Council for U.S. President Barack Obama during the early part of his administration.

Rhee graduated from Inchang High School in Seoul, which is famous for its volleyball players, with Yoon, the executive director of the IMF.

Rhee was reportedly a volleyball player until his second year in high school.