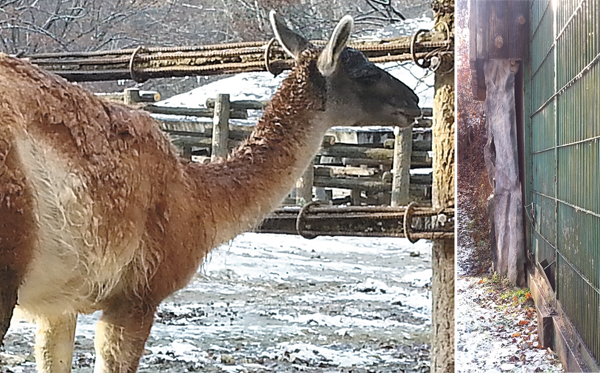 Left: A lama walks by a broken fence at the wildlife park Wednesday. Right: A wall besides a cage for bears shows wide cracks due to poor maintenance at the Seoul Grand Park in Gwacheon, Gyeonggi. By Kang Ki-heon

At an indoor exhibition at the Seoul Grand Park in Gwacheon, Gyeonggi, water dripped from the ceiling constantly when the JoongAng Ilbo visited Wednesday.

Moss was also seen growing up the wall; floors were soaked with water.

The aging display, the so-called Orient Exhibition built in 1983, is symbolic of the poor maintenance and generally shabby conditions of the poorly funded wildlife park, which made headlines earlier this week when one of its Siberian tigers escaped its enclosure and bit a 53-year-old veteran zookeeper in the neck, severely injuring him.

Maintenance for the facilities that are not open to the public were even worse.

The floor of a cage for bears was cracked, and the bars of the cage were rusted. Cracks in the walls were easily found.

The crumminess of the facilities plainly affected the animals. An American black bear weighting more than 200 kilograms (440 pounds) was seen caged in a 16-square-meter (172-square-foot) confinement built 30 years ago.

“It’s not that hard to imagine how hard it is for those huge bears to be kept all the time inside a cage this bad,” said a zookeeper.

“The most pressing problem with the substandard maintenance here is the potentially detrimental effect on the animals’ physical health,” said an official at the zoo speaking on the condition of anonymity. “Many of animals here are living in conditions worse than what Jedol had.”

Jedol was a 14-year-old Pacific bottlenose dolphin used in a dolphin show at the zoo after being illegally caught by fishermen in 2009. The dolphin was released in waters off Jeju Island in July on the orders of Seoul Mayor Park Won-soon. The release process cost the city government 760 million won ($718,057).

Recognizing its poor maintenance problems, the zoo made an assessment last month, discovering there are three water leaks in the roof of a building that houses bears.

In the assessment report, the park acknowledged there is a need to repair the aging facility to “safeguard the safety of visitors and prevent the escape of animals.”

But with its budgetary constraints, the zoo delayed the overhaul to 2015.

The Seoul Grand Park says the subsidy provided by the Seoul Metropolitan Government, 3 billion won a year, is far short of the amount it needs to properly maintain the park. In fact, it only accounts for 50 percent of its budget, the rest being made up by ticket sales.

The park claims revenue from ticket sales are pretty meager to as it only charges 3,000 won per adult for admission, a price that has been unchanged for 10 years and much lower than the 40,000 won that Samsung’s Everland charges.

An official at the Seoul park told the JoongAng Ilbo that it does not make sense to demand the zoo conduct better maintenance work when it only has 3 billion won to spend.

“It is virtually not possible to properly manage a park the size of Yeouido with only 3 billion won a year.”